Sometimes at night, I see their faces, I feel the traces they’ve left on my soul. Those are the memories that make me a wealthy soul.Bob Seger, Traveling Man

I lost the first of my beloveds in 2002 when my cousin Seymour died. Seymour and his wife, Barbara (my dad’s niece) are my second parents. I grew up spending summers, vacations and holidays with them and their family. Barbara and Seymour are my parents’ best friends. They considered me their third child.

Jimmy was devastated when Seymour died at the age of 82 and couldn’t stop crying. Barbara suggested I tell him that Seymour was old and had lived a long, full life. This did not work. Jimmy’s response? “Poppa is 101 years old. So is Great Grandmother Beryl (my mom’s mother). Seymour was not old!”

A year later, Dad died at the age of 102 1/2. We were sad to lose him, but felt lucky to have had him for as long as we did. Although he was mentally sharp until the end, he’d been in an increasing amount of pain, and more importantly, he wanted to go.

Mom’s death, like Seymour’s, was a surprise. I’ll never know if she didn’t tell me how close to death she was or if she didn’t know herself. But either way, despite being 92 years old, she wasn’t ready. She had just started a new project of reading a biography of each of the presidents, beginning with Washington. I found his biography, along with one of John Adams, on her desk after she died.

Last week, I visited my cousin Barbara who will be turning 92 later this year. As you might imagine, she misses Seymour, Mom and Dad terribly. We spent a lot of time, as we often do, reminiscing about our time together at Fernrock, the property that she and Seymour lived on for over 40 years. The leisurely breakfasts in their sunny dining room .. the sound of Seymour grinding the coffee beans .. the bright orange of Mom’s marmalade .. conversations about politics, art, literature, the family .. Seymour leaping up to get a dictionary or encyclopedia to settle an argument (no iPhones back then ..). Dad and Seymour chopping and stacking wood. Mom and Barbara drawing and painting. The feeling I had as a child that these four people who loved me so much could work together to solve any problem, deal with any situation. 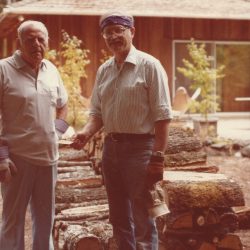 Barbara is losing her memory, which makes these conversations more precious, and I’m grateful that she remembers as much as she does. As I was driving home, I spent a long time thinking about memories and what a gift they are when those you’ve lost didn’t die before their time like Jimmy did. I would give anything to have one more conversation with Mom, Dad and Seymour. But I can also shut my eyes and go right back to Fernrock. I can see the redwood trees and the sun coming through the sliding glass doors. I can smell the coffee and taste the ginger in Mom’s marmalade. I can hear them laughing as Dad tells a funny story. Most importantly, I can still feel their love, steading and strong, wrapping all around me, holding me close, keeping me safe.