You can hold back from the suffering of the world, you have permission to do so, and it is in accordance with your nature, but perhaps this very holding back is the one suffering you could have avoided. Franz Kafka

When I was younger, I was all about the denial. Looking for the person who forgot to replace the empty toilet paper roll? It wasn’t me. Trying to locate the person who caused the trash to overflow (“gar-pack-tion” as my roommates and I used to call it)? Look somewhere else. Wondering who left the dishes in the sink, forgot to call the handyman, buried the credit card bill in a pile of papers? Not me, not me, not me.

There’s something seductive about forestalling the pain of getting caught having made a mistake or letting someone down by trying to pretend it either wasn’t you or wasn’t your fault. It took me far too long to learn that when it comes to the big stuff in life, it’s much better to face the music than make matters worse by proclaiming innocence.

I engaged in this practice when it came to people, too. Seeing people for who I wanted them to be, not who they were. Patiently waiting for a change in behavior without acknowledging that they weren’t capable of it. Hoping that if I didn’t get upset or angry that I’d be the priority I wanted to be instead of an afterthought or a hanger-on. I didn’t know that the pain of those small blows — of being left out or the last one invited or the backup option — was so much worse than facing the truth and finding new friends.

There was another cost to this denial. My focus on these shiny friends that I so desperately wanted to like me took my attention and appreciation away from the loyal, loving, funny, sweet friends who were all around me. I undervalued their kindness, their steadfastness, their inherent goodness. I took for granted their willingness to show up, call back, make time, include me.

Life has a way of repeating the lessons until you learn them. And there’s nothing like a lost job, an ill child or a death in the family to reveal who really has your back. 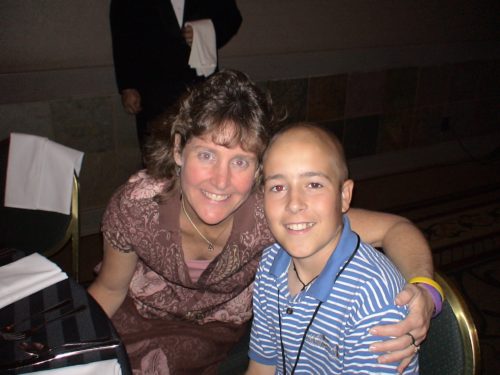 Left to my own devices, I tried to look away from Jimmy’s cancer those early days, too. The statistics were so favorable — an 80% survival rate at five years. Long term side effects seemed far away. Besides, how could anything happen to the kid who recovered quickly from his initial brain surgery, sailed through radiation without needing a feeding tube and avoided hospitalization for infection despite undergoing nine rounds of chemotherapy?

Jimmy taught us all how to live. How to feel what you feel and not run the other way. How to tell the people you love most exactly how you feel about them and why. How to say ‘No more’ to those you don’t. How to be fully present even when you’re dying. How to keep living right up until you draw your last breath.

To look away is to miss out. To fail to see the beauty amidst the pain. To overlook the laughter amidst the sadness. To regret what wasn’t said or wasn’t done, long after you can do anything about it.

Bearing witness to your dying child is a pain like no other. It feels as though the skin is being stripped from your body, piece by piece. To watch the decline, the loss of function, the pain you can only partially control, the unstoppable march towards an outcome that will end his life and shatter yours. The agony of that is with me still. But I will never regret being present for every minute of those final months and weeks. To see my son’s courage, his willingness to enjoy whatever and whoever the day brought to the house, his determination to keep laughing and spending time with the people he loved best. It was an honor to be part of it, and I’m so grateful I didn’t hold back or look away or I would have missed it all.