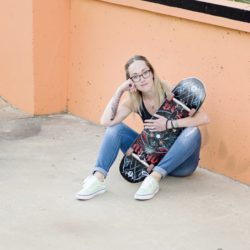 Aimee is a writer, chiropractor, wife, and mother of three, two of whom walk the Earth with her and one who lives in Heaven.

In December of 2019, her 12 year old son, Luke, had an accident while playing in the basement, and despite the best efforts of Aimee, the first responders, and the staff at their local hospital, his life could not be saved. After being airlifted to Health Science’s Centre in Winnipeg, Luke was pronounced brain dead, and Aimee, along with her husband Kevin, made the decision to donate Luke’s organs.

Since that time, Aimee has been openly sharing her grief journey both through her writing and through The Green Heart Project, a program through which she raises money for donation to local charities in Luke’s name. Follow Aimee on Instagram @green_heart_project

I hope
Before you made the first cut
You took a deep breath
Remembered he was a child
A living, breathing little boy
Only days before