And it is still true, no matter how old you are, when you go out into the world, it is best to hold hands and stick together. Robert Fulghum

As soon as my kids emerged from the womb, I wanted to hold their hands. Initially while I was breastfeeding, looking down at their sweet faces, marveling at their arrival. Then later, as toddlers, worrying that they would get too far ahead of me and rush into the street.

Jimmy, as he was about most things when he was little, was more easy going about this. He accepted the need to hold my hand to cross a street or as a signal that it was time to leave the park or the playdate and head to the car.

Molly was more black and white. Eager to stay close when she was little and then, once she found her voice and her independence in Teacher Laurel’s preschool class, impatient to be off on her own with her little friends.

Like Molly, my parents weren’t hand holders. I think my mother would have been but my father didn’t like public displays of affection so it was only when I entered a room quietly and unexpectedly that I might catch Mom sitting in Dad’s lap or the two of them waltzing around the library as Dad hummed a tune they both loved. 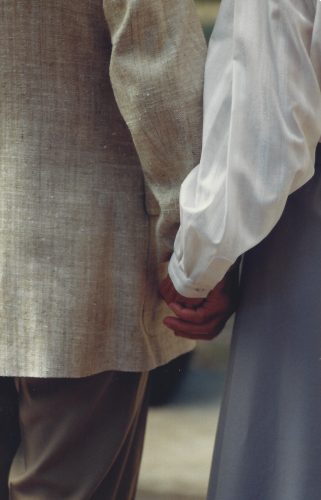 Barbara and Seymour — my cousins, my other mother and father, my parents’ best friends — held hands often and without regard to where they were. It was a funny experience to sit in between them at a concert or opera, Barbara and Seymour on one side of me holding hands the entire time while my parents sat three inches apart on the other side as though they were on a first date.

Even our dogs have been of two different minds about having their paws touched. Our first dog Bronco, a calm, affectionate yellow Lab with endless patience for small children, loud noises and people of varying ages draped over him, hated having his paws touched. Buster, the sweet, neurotic Border Collie mix we rescued after Bronco died, craves physical contact and closeness with the three human members of his pack and cares not whether that means a belly rub or his paw being stroked or held.

My husband is like my father. He’s not big on public displays of affection, and he doesn’t like it when I try to hold one of his “paws”, often justifying his discomfort by pointing out that Bronco didn’t like it either.

Jimmy’s willingness to hold my hand didn’t change much as he got older. He liked stroking or holding my hand and plopping himself down on my lap, even as a teenager.

I’m pretty sure that if I tried to hold Molly’s hand at her ripe old age of 22, I’d get the same look I get from her father. So I have to be content with stroking Buster’s black, silky paws when we cuddle in the brown recliner as Dan and I binge watch The Amazing Mrs. Maisel or Sneaky Pete.

When we’re in the throes of toddlerhood, we can get so tired sometimes of our kids hanging on us, clinging to us, wanting to be picked up. It’s only when they’re grown or gone that we get wistful for those long gone days. I miss Molly gripping my leg and following me around the house. I miss the weight of Jimmy in my lap and the warmth of his soft hand holding mine. I wish I’d been more present for some of them, instead of being distracted by thoughts of what to make for dinner or how messy the house was.

Yet those memories are some of the easiest to conjure up. The weight on my leg. The tug on my pants. The pressure of their hands. Although I can’t go back, those bonds endure despite time and distance, and the magic of our love and connection remains. 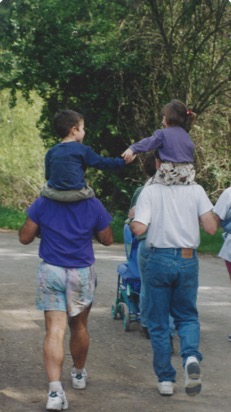