Love Will Have To Do

Love will have to do, along with bright and dim memories, some that still hurt, others that we savor like Life Savers tucked away in our checks. Anne Lamott

This afternoon, I stumbled across the cartoon of Barbara Bush in heaven, drawn just after she died in 2018. Mrs. Bush is standing on a cloud wearing her signature pearl necklace. Her arms are wide open, and she’s exclaiming “Robin!!” as her three year old daughter who died of leukemia races toward her. It’s a stunning image of a loving mother reunited with her beloved child, but what struck me was just how long Mrs. Bush had to wait for this homecoming – sixty-five years.

After Jimmy died, I thought a lot about joining him. About the way death doesn’t scare me so much any more. About the way we mothers of dead children spend the rest of our lives torn between the child who’s departed this earth and the child or children who are still here. A “Sophie’s Choice” with nothing but sorrow, searing pain and a trail of broken glass in either direction. On the days when the pain of his absence was too much to bear, I forced myself to remember how much Jimmy wanted all three of us – Molly, Dan and me – to keep living. How badly he wanted to stay, just not in his body. It was too beaten up, he said.

One of my dearest friends lost her daughter Alexandra to neuroblastoma, a lethal form of pediatric cancer, more than 25 years ago. When I realized that Jimmy was going to die, I went to Regina and asked how I was going to survive without him. She told me she didn’t know, only that I would. One breath at a time. One moment at a time. That she would hold my hand and stay close. And she has. And I have.

Somehow, we get the idea that life is supposed to be not easy exactly, but not excruciatingly painful either. We think happiness is a worthwhile, attainable goal, and that we have more control than we do. When our lives spin sideways or something unimaginable happens, we think we’re doing it wrong, not realizing that this is just the way life is. 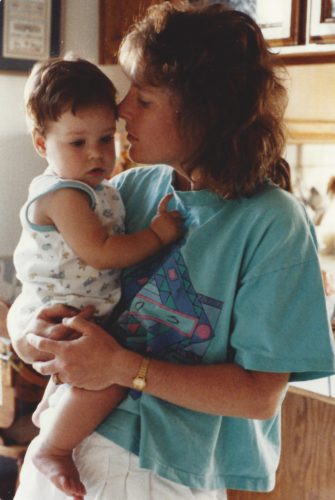 I don’t believe this any more. I think life is really hard, not for everyone on the same day or in the same year but there’s grief in every room, even if you don’t know where to look for it. I’ve also learned that love and hope are bigger than any grim, bleak shit life can throw at us, just as Anne Lamott says. That love is what helped me survive the death of my only son as it poured out of the brave, shiny souls who climbed down in the dark pit of misery with me and refused to look away. The ones who didn’t try to smooth, fix or soothe. Who listened to me rage without judging the bile that poured out of me. Who didn’t fault me for wanting to know why this had happened to my son, even though Jimmy himself had never asked the question “Why me?” even once.

Despite being seven years down this path, meeting someone whose child has just died puts me back in those raw, wretched early days in an instant. I may not wrap myself in that pain any more, but I carry it still. Like a match, it only requires a small spark to reignite it.

Life is brutal. But it’s also holy and magical and full of grace. You don’t have to be unmarked by loss to find joy, and you don’t have to be whole to keep living. I’ve come to see the way the dull brown of despair makes the silver strands of joy sparkle and dance, the same way the shadows make the light seem brighter and more beautiful.

Someday, whether it’s eight years or forty, my time to depart will come. When it does, I, too, will throw my arms wide, call out Jimmy’s name and grab hold of my beautiful boy. But for now, I can wait. Despite all the pain and suffering, this life is still worth living.