I was out watering the plants in my front yard a couple months ago, trying to give them a good drink before the heat of a Sacramento August day, when Robert Gordon walked by. He was moving at his usual fast pace, paint-spattered shorts to his knees, flip-flops squishing in the water I’d inadvertently added to the sidewalk.

He sang to me by way of greeting: “Like a bridge over troubled water, I will lay me down.”

“I’m gonna leave you a new painting,” he said. “You’re gonna love it.” 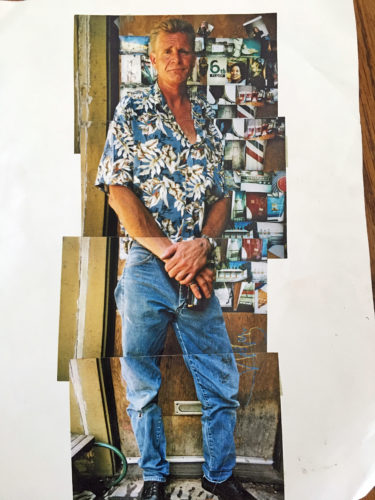 Every so often I come home to find a Robert painting on my porch, always on some scrap wood or cardboard. I think of him as the moonstruck artist because there’s clearly something a little different about him. And not least because he likes to paint moons. He veers from topic to topic in conversation, his colors run to the wild, as do his images, some of which look as if they were painted under the influence of hallucinogenics or mental illness—though I prefer to think of it as inspiration.

A couple of years ago my next door neighbor hosted an impromptu art show featuring Robert’s paintings and freeform, found object sculptures. She told me that Robert lived in a halfway house not far from us. I bought a few paintings of his—my favorite a big, beautiful round moon with a smiling face and a clock in the center of it. It had a $15 sticker on it. I gave him $25, and the moon sat in a protected area on my front porch for quite a while.

One day I came home to find that the moon had disappeared. In its place I discovered two pieces—one boxy looking thing, originally cardboard, painted with odd abstract pieces sticking out of it poked onto thin wire. I didn’t love it, but I could guess who’d dropped by. But the moonstruck artist had also left a long, horizontal board with a small moon on it overlooking the Tower Bridge—a Sacramento landmark that made me smile. A new moon, as it were.

When I next saw him walking by, I asked, “Hey, Robert, did you take the moon clock and leave me these pieces?”

He looked momentarily confused, started talking about something rattling around in his brain, then shook his head like a wet dog.

“Oh, yeah. I needed it for a show I’m doing,” and he named a gallery I’d never heard of. “I left you the other pieces—are they all right?”

“Yeah, of course,” he said. “But did you…” and off he went into another topic as he came up on the porch to look at his art.

“I love the Tower Bridge one,” I began.

“I put a moon in there for you,” he pointed with an index finger.

“What about…,” he gestured to the boxy thing.

“I’ve gotta say that’s not my favorite piece of yours…,” I began.

“No problem,” he said, reaching for it. “I’ll take it back.” He genuinely didn’t seem upset by my appraisal.

“Let me pay you for the bridge painting,” I said.

He looked at me as if he’d never considered such a thing. “You don’t have to,” he said. “I just thought you’d like it.” 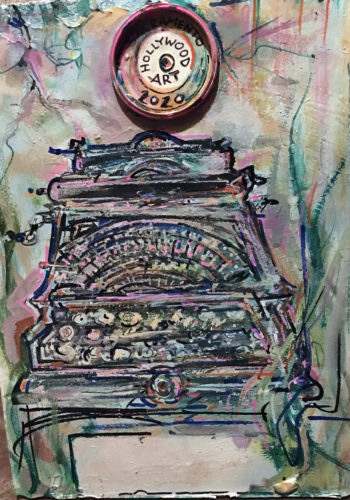 I went inside the house and returned with a twenty and handed it to him. He extended his hand for a shake. In that pre-COVID moment, I shook on the deal.

“Thanks,” he said, already heading for the sidewalk, on his way toward J Street. He turned near the end of the driveway. “I’ll bring more.”

And he has. One day I came home to a painting that just gobsmacked me—a vertical piece of wood curved on top that might have once been a cupboard door. It says WELCOME in capital letters over a house and a tree. It took me a minute to realize that Robert had painted my pink house and my tree (and a sweet crescent moon!) in unusually subtle colors for him. I got a little teary. When I next saw him, I offered to pay him, but he refused. 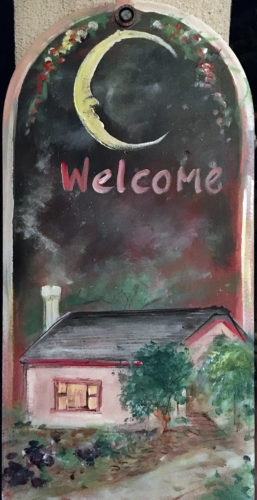 He stops by from time to time, and, if I’m out in front, we chat. When I ask now and then about my moon clock, he is vague. Once he said someone offered him “a lot of money for it.”

“I’ll make you another one,” he said, “if I can find a round piece of wood again.”

He nodded, then set off into his day.

As I watered, I thought about my friend Pat Schneider who had recently died after a long decline. She created the writing method I use in my writing groups, and over a period of about eight years I hosted her in Sacramento at least six times that I can recall—maybe more—as she led workshops and did lectures here. We became great friends, and she was a feisty, sometimes cranky mentor. But I adored her and she me. She published a book of my poems, and I proofread the manuscripts of her last two books.

Though I knew she’d been declining in her home in Amherst, Massachusetts, and that Pat and her husband Peter had moved to assisted living for the better part of a year, and I got word on an email list of “nearest and dearest” (her term) from one of her daughters that she had entered hospice, I found myself enveloped in grief when word came that she had died. As I do with so many people in their final days, I hold them in prayer and meditation, wishing for an easy passage at the same time I didn’t want her to lose her. It’s so human to want them to stay and go at the same time.

That day, seeing Robert, I thought of Pat’s brother Sam, who, like their mother, struggled with mental illness. Sam, whom she described as “a drifter,” often homeless, put in jail here and there. She told the story in her book about writing that Sam was as good a writer as she was, but motorcycle riders from hell, as he once wrote, pursued him. He died young, and she mourned him in her poetry and prose.

I have failed in my life, many times, to appreciate people who are different, especially those who may be challenged by mental illness. I’ve had a lot of students and not a few friends and former friends who fit that description. In recent months I’ve realized that Robert, this uncommon man and congenial artist, has been delivered to me. He is a Sam of sorts but with a safe place to live, a painter who lives to paint, who scrounges materials to make his art, then gives them away with no expectations of money. These are gifts from his heart on found pieces of wood and cardboard. 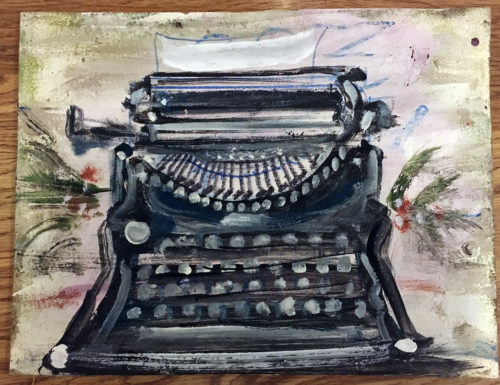 And Robert can paint anything. Not long ago, as he left after a brief visit, I called to him, “Paint me a typewriter.” He laughed and pointed to an old manual Remington that lives in my front yard. I promptly forgot about my request. But within a week I was coming home to painting after painting of typewriters propped on my porch—a tall vertical one with typewriter and a tall black cat, and another square one that’s inscribed, “Write a book. Get rich.” (That would have made Pat, a well-published but far-from-rich writer, laugh.) At the rate they’re arriving, I may soon have as many paintings of typewriters as I do the actual machines—and that’s a sizable number.

But that day in August, Robert walked by my house and sang to me (“sail on, silver girl, sail on by”) as I was missing a person I loved, one I had never expected to meet, much less turn out to be a woman who loved me ferociously and gave me so much.

After the artist who leaves me treasures continued down the street, I smiled and pointed the hose nozzle up in the air, letting the shower cool me, smiling about the unexpected gifts that arrive in human form—the ones, if we’re lucky, we think to cherish when they’re right in front of us.