In the end, this may be why certain losses are so shocking, not because they defy reality, but because they reveal it. Kathryn Schulz

Dan and I fell in love with Jimmy from the moment we laid eyes on him. Scrawny and red-faced with a full head of dark hair, his squall let everyone in the birthing room know he had arrived. Although Jimmy was quick to figure out nursing  and mellow from the outset, I was scared to take him home. As an only child and the only cousin my age in the family, I had no experience with babies.

As new parents, Dan and I made many of the mistakes outlined in the parenting books, getting by with a few of them because Jimmy was so easygoing. The biggest blunder we made early on was rocking Jimmy to sleep. We’d trade off nights cradling him in the rocking chair, often for up to an hour before he dozed off. Then we’d gingerly place him in the crib and tiptoe out of his room. If he stirred himself awake and began to whimper, we’d start the process all over again.

We were a few months into this routine when my parents came for a visit. Mom took one look at this self-imposed ordeal and gave me a gentle talking-to about the importance of letting Jimmy learn to self-soothe. She directed us to put him down awake, leave the room and let him cry if he protested. Listening to him wail for 30 minutes that first night was more than I would have withstood without Mom there to reassure me that we were doing the right thing. The second night, Jimmy cried for five minutes. The third night, he burbled happily for a bit and then fell asleep.

I thought of this recently when a friend asked for advice after her toddler made off with the pumpkin she was planning to use to make pumpkin chili. After drawing a face on its smooth, orange face, he pronounced the pumpkin his new best friend and installed it on the bookshelf in his bedroom. My friend’s mother had passed away before her son was born, so she turned to her friends on Facebook, looking for reassurance that if she took the pumpkin friend back after her son fell asleep, he’d find a way to forgive her someday. Moms chimed in with stories and advice, showering her with reassurance and love. It was heartwarming to watch and reminded me of how lucky I was to have had my mother during my kids’ formative years. I had appreciated her wise counsel at the time, but I had never considered the alternative and just how hard it would have been to navigate parenting without her. 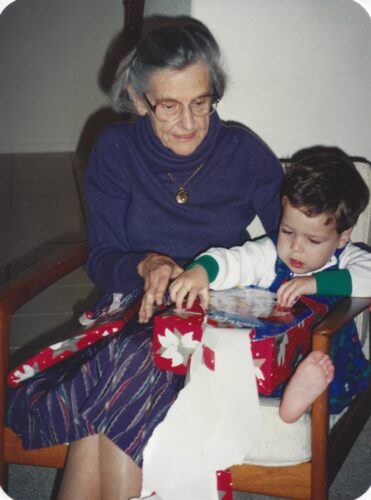 Mom loved Molly and Jimmy fiercely and had endless patience for both of them. On her visits, she was always willing to play or draw or entertain them until they got bored or wandered off. She held them as babies and read Goodnight, Moon and the Little Bear books over and over without complaint. She listened attentively to their stories, no matter how mundane or long-winded they were. When the kids were busy with friends or off at school, she cleaned our kitchen, unloaded the dishwasher and chopped vegetables for dinner. She’d throw in a load of laundry and leave the clothes folded on my bed. She was happy to take a trip to the market or meet up with one of my close friends for lunch or coffee.

It wasn’t until Mom entered what turned out to be the final decade of her life that we started to bicker. The disagreements were rarely about anything significant or meaningful. Instead, we argued about which cucumbers were sweeter (Persian for her, English for me); why it’s worth spending more for Peets coffee than the Trader Joe’s brand (me); why whole yogurt is better for you than low fat (her). Jimmy’s brain cancer had recurred by this point, but I was too overwhelmed and terrified to realize that much of my short-temperedness and irritation with my mother was brought on by the stress and bone-deep weariness of parenting a child with a terminal illness and later the searing grief that came after he died.

I didn’t know my mother was dying until a nurse from her hematologist’s office called to tell me two days before her death. It took years of reflection before I realized that the changes I seen in her – the cutting comments about a friend or family member, the continual critique about my produce choices, the constant counsel about cooking or household chores, had largely been fueled by the pre-cancerous blood disorder that ultimately killed her.

My mother has been dead for more than seven years, which stuns me to say. Even now, I find myself reaching for her only to remember, yet again, that she is no longer here to answer my call. The gaping hole her departure created can never be filled. The part of me she took with her will never be found. But she raised me to be tough and resourceful and believe that no matter how sticky the problem, a way out of it will always be shown, so I have found ways to soldier on.

Mom spent my life coaching me on how to live without her, although I’d thought at the time that I would have another ten years before I’d have to. She taught me to hang on to vases because you never know when you might need to take flowers to a brokenhearted friend. She taught me that glass is superior to plastic for storing leftovers, and that no matter how tired you are, it really is better to clean the kitchen before you go to bed. She taught me to show up when someone I loved was in pain, even when I was scared and had no idea what to do or say. And she taught me that it’s always better to face the truth of a situation than live in fear or denial.

I wish I’d had more patience for her during the final years of her life. That I’d been less reactive and had let go of what she said instead of feeling the need to argue with her at every turn. When she left, I lost the keeper of my memories and the person I most want to call when I stumble or triumph. As hard as I try to imagine what advice she’d give me in a sticky situation, I am so often lost without her.

It was only recently that I realized her end-of-life crankiness may have been her final lesson. I still have a difficult time not engaging when someone is irritated or snarky with me, but since Mom died, I have been getting better at it. In those moments when I breathe in instead of responding or retaliating, I think of Mom and the way she is parenting me still.