For the rest of my life, I will live with my hands outstretched for things that are no longer there. Chimamanda Ngozi Adichie

I am my father’s daughter. Clothes neatly folded or hung in the closet, grouped by type or use. Never on the floor in piles. Desk organized. One pen of each kind and color. Paper clips corralled in a plastic magnetic dispenser. Stapler lined up with the Scotch tape dispenser, one on either side of the pen cup. “A place for everything, and everything in its place,” Dad would say, quoting Benjamin Franklin.

Between managing his business and dealing with his often volatile family, Dad struggled to find the peace and quiet he craved. I think the carefully labelled folders, neatly organized filing cabinet and pristine desk were a way of imposing order and control where he could.

Like Dad himself, his home office radiated deliberateness and careful consideration. There was something so comforting about plopping into the woven teak chair next to his “Magic Box” folding desk and pouring out my worries about a challenging project or demanding client. Dad leaning back slightly in his black leather chair, elbows on the armrests, fingers lightly pressed into each other as he listened intently. No matter how hard the question or how huge the challenge, Dad had an article, an idea, an approach to suggest.

During these days of contentious political divisiveness, social unrest and deadly discrediting of facts and science, I find myself longing for that oasis of a room, that teak chair, Dad’s assurance that “this, too, shall pass.” The safety, security and predictability that often felt boring when I was growing up. A supper must be on the table at 6:00 o’clock life. The colorful, graceful arrangement of Mom’s whole foods, Diet For A Small Planet meals on brown Dansk plates. Calm conversation about how we’d spent our day. Doing my homework to the sounds of my parents analyzing a ballot proposition or discussing the actions of a difficult family member as Mom washed the dishes and Dad dried them. The dull roar of the television as they watched The MacNeil Lehrer News Hour, Masterpiece Theater or another PBS program carefully chosen from the weekly TV guide that arrived each Sunday in the San Jose Mercury. The guide spending the week in the teak end table that sat between their matching black leather teak chairs in the family room, big red check marks next to the programs they wanted to watch.

Dad was quick to get irritated but slow to anger. When I dropped a glass, forgot to empty the trash or left a light on in an empty room, his comments could be sharp, sometimes even harsh. But ask for his opinion on Israel relinquishing the Gaza strip to the Palestinians or Ross Perot as a presidential candidate, and he would discuss and analyze the question for hours. A lifelong conservative who became pro-choice in his 80s, Dad loved a spirited debate, seeing it as an opportunity to learn something new. Despite mock complaints about my mother’s vote “cancelling” his during some presidential elections, he wasn’t afraid to have his opinion challenged or his mind changed, often quoting British economist John Maynard Keynes, who said in response to someone asking why he had altered his view on an economic question––“When I’m wrong, I change my mind. What do you do?” 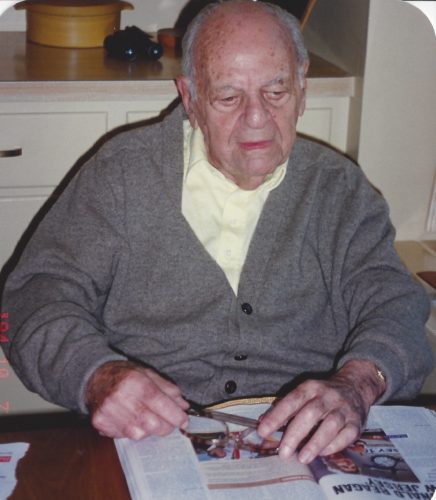 Preoccupied by the turmoil in the world, I often distract myself by hunting on the internet for useful articles for my consulting company’s social media, wishing Dad was still running what my sister called “the best clipping service around.” The fat, #10 size envelopes packed full of carefully chosen, neatly folded articles from Time magazine, The Wall Street Journal, The San Jose Mercury, Forbes, Business Week or the Santa Cruz Sentinel usually arrived weekly. Despite culling them over the years as they became dated or irrelevant, I still have a file folder full of the timeless ones. Yellowed with age, dated at the top in Dad’s artistic penmanship, full of red underlines, sometimes with a note at the top––“I know you are aware of most of this, but I thought it a good review.” I lack the time, energy or inclination to read as broadly as he did about the issues of the days, to collect data, look for conflicting views, search for the cracks in both sides’ contentions.

Weary of the polarization, I struggle to stay informed, saddened by the harsh comments and personal attacks, frightened by the refusal to listen, negotiate, understand. I wish Dad were here to reassure me that “The Republic will survive,” his wisdom and perspective born of living through both World Wars, the Great Depression, the Civil Rights movement, the Vietnam War, Watergate. Without him, I do not know how to process or calibrate this reality show world we’re living in.

Even now, I reach for the phone, only then remembering that the man I want to talk to has been dead for seventeen years. He cannot answer my questions, send me an article or place what’s happening in a broader historical context. I have to move forward without his calm vote of confidence, navigating the world without the protection his quiet pride in me provided. I remind myself of the way he didn’t accept a story at face value, but paused instead to investigate, ask questions, learn more. The way he absorbed bad news and turned to face it instead of looking away.

Even now, in many situations, I know what he would have thought, said or done without being able to ask. The routine and rhythm of his days were mirrored in the way he lived. Steady, reliable, consistent, true. Family first. Moving forward with all deliberate speed. A willingness to be pleased by the simplest gestures, to offer grace and forgiveness for sharp words, honest mistakes or impetuous decisions. Dad would have stayed true to his beliefs, no matter the pressure to stick with a political party or popular point of view. If I sit quietly and close my eyes, I can still hear his mellifluous baritone voice reminding me that there is always a way forward.