I want to know what else sustains you from the inside when all else falls away. Oriah Mountain Dreamer

The first time I fell hiking was six years after Jimmy died. Dan, Molly and I were descending a steep gravel road on the Shirley Lake Trail in Lake Tahoe. Dog leash in one hand, a bag of snacks and a water bottle in the other, I had no way of catching myself when my feet went out from under me. I landed on my back, my head bouncing hard on the pebbly surface. After some tears, I got up, brushed myself off and kept going. No concussion, thank goodness.

The second fall took place more than a year later on the Kuamo’o Trail on Nounou Mountain near Kapa’a, Kauai over Thanksgiving. The path was slick and muddy from a recent storm, dotted with banana leaves like lily pads on a pond. We were almost finished with the 5.7 mile trail when I stepped squarely on a banana leaf. My foot slipped, my ankle slammed into a rock as I fell. By the time I limped the last half mile back to the car, the entire top of my foot was black and blue.

What was happening here?

Dan told me that my weight was too far forward on the downhill. Molly said I needed to stop carrying loose items and keep my hands free. 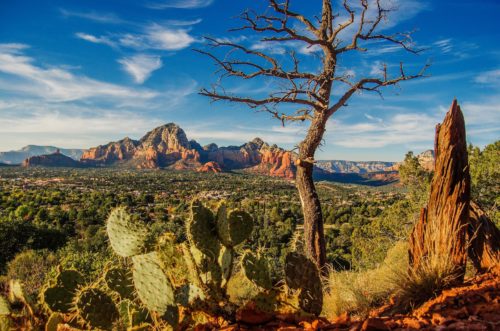 A month later, I fell again on the Airport Loop trail in Sedona. We were trying to squeeze in a hike before the rain started up again. We’d navigated the first half of the trail, the part where the path disappears at times, leaving you to clamber over smooth basalt boulders with nothing but prickly pear cactus to break a fall, when the skies opened up.

Happy to be on the wider part of the trail, I picked up my pace to catch up with Dan and Molly. Then, with no warning, both of my feet stuck in the mud. My momentum pitched me forward, and I landed hard on both shins on the rocky trail. As I sat up and pulled my legs into my chest, I could feel the goose egg already forming on the left one.

I had no choice but to hike back to the car. It wasn’t until I pulled off my pants to take a hot shower at our Airbnb that I discovered my right leg had an inch and a half long gash just below my knee. The skin had split apart exposing multiple layers of skin. A half sob, half moan escaped my lips. Dan appeared in the doorway, took one look at the laceration and announced we need to head to the ER.

Sedona’s small community hospital was quiet on Christmas Eve. As Molly, Dan and I sat in the uncomfortable pastel waiting room chairs, my left shin throbbed rhythmically while my right began to bleed, red running down my leg like an unbroken tear.

The hospital staff was kind and efficient. My legs were x-rayed, the lesions cleaned out, the split stitched. Nothing was broken or fractured. The knee and patellar tendon were unharmed. The doctor even said I could begin hiking the next day, as long as I stayed on flatter trails and avoided falling. The news was all good. Yet I felt shaky and upended, as if the ground under my feet was no longer stable or secure.

I spent the next few months analyzing these three falls, wondering what they had in common and how I might avoid them in the future. Hiking had helped me survive Jimmy’s death, and it’s our favorite way to explore new territory as a family. Giving it up wasn’t an option, but I had to figure out how to stop getting injured.

I realized that in all three cases, I had fallen when I least expected it. In Tahoe, I had let my guard down, spent from slogging the 2000 foot climb to the aerial tram. In Kauai, I stopped paying attention to where I put my feet once the path leveled out, and the car was in sight. In Sedona, I’d gotten cocky after navigating the more obviously treacherous part of the trail.

Grief is like this, too. You survive the steady agony of the early years after your loved one dies, braced for the daily, even hourly pain of living on without them. Anything and everything can be a trigger or new source of suffering. You analyze each new invitation, each phone call, determining whether it will help or hurt. Every choice, every decision has previously unnoticed consequences, and nothing is easy. But as the years roll by, it’s tempting to assume that the worst is past until something you never see coming drops you to your knees. The wedding of your son’s best friend. The birth of a friend’s grandchild. The release of a new Netflix series he would have loved. A question he is no longer here to answer.

When I was a child, my father used to tell me the story of a pilot and avid skier who was profoundly injured in a car accident. She struggled to relearn to walk and wasn’t able to return to many of the activities she’d previously enjoyed. When a reporter asked how she managed in the face of her life-altering injuries, the woman replied, “When I drop something, I pick it up. When I fall down, I get back up.” Which is right up there with the best advice about life I’ve ever heard. 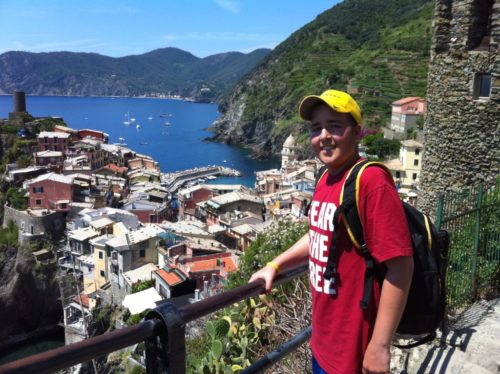 Jimmy fell frequently after his diagnosis, the tumor and treatment both knocking him off balance. Like the pilot in my dad’s story, he never failed to get back up again. Sometimes unharmed. At other times, battered and bruised. Yet Jimmy pressed on, trusting that if he did wind up on the ground, he would be able to stand up and keep moving.

The scar on my knee has whitened and healed and looks like the crossbones on a pirate ship flag. A visible reminder of the damage done, unlike my grief which often feels invisible and unseen eight years out from Jimmy’s death. People don’t diminish or dismiss the magnitude of my loss, but unless they, too, have lost a child, they can’t understand all the ways, both small and large, that the wound gets torn open.

I used to think that success meant being happy. That only when life was going well was I doing it right. Stumbles and tumbles, mistakes and hurt feelings were obstacles to be overcome and forgotten as quickly as possible. It’s taken me a lifetime to realize that falling is part of life, and that the only way to avoid it is to stop venturing out, to stop taking chances.

My falls will not keep from the trail. Each of mine is different, the only through line my momentary arrogance and slipped attention. Thinking that I was past the worst part of the journey and doing fine, only to find my feet slipping out from under me. I’m taking more precautions now. Choosing the hiking trails more carefully. Moving more deliberately. Paying more attention. Reminding myself that if I do fall, like Jimmy, I, too can pick myself up and find away to go on.