I drove to the Napa Valley over spring break to walk with a friend who has, it seems to me, the most difficult job I can imagine. I went for the day, though once there I wanted to sink into the grass and linger for hours beneath a majestic quercus lobata, the California white oak, rooted in the soil of the largest veterans’ home in the country. It’s a huge park, this campus overseen by my friend Ursula Stuter, who has been the acting director of this place since last May. She looks out for about 850 veterans plus a roughly equal number of staff on 900 acres with two reservoirs. It has its own post office and baseball field, golf course and swimming pool and medical facility, this small town within the small town of Yountville.

It has, for 134 years, been a peaceful retirement community of men and women spending their last years in paradise.

Until less than a month ago when a gunman stormed into a going away party, took three women hostage and killed them. One of the women was pregnant. Another was Ursula’s good friend who ran the program for veterans with PTSD. The gunman had been kicked out of the program because knives were found in his possession. He returned with a vengeance.

And when it was over, Ursula was one of the first people who had to walk into that abbatoir and deal with the aftermath.

I was going to take a group of writers from Sacramento to write with Ursula the day after the shooting. We’d planned it for months. The day of the shooting, I canceled our write. But I couldn’t stop thinking about Ursula. I emailed her; she emailed back. “Do you want to write and read to me?” She did. I listened as she began to unfold the story over the phone.

I knew from the first time she read to me that I wanted to show up in person for her. She liked that idea. So during the week leading to Passover and Easter when we were both off from work, I drove to Yountville. I was pleased to see spring springing — the hills around Vacaville erupting with new grass, bright blue sky punctuated with fluffy clouds, the skeletons of grapevines waiting for the bounty to come.

“Bring your walking shoes,” Ursula had texted me, which I did. I found the house on campus she shares with her husband and children — two half-plexes, newly linked with a passage — and was warmly welcomed by their “littles”, the two youngest, Edward and Bridget, as well as by her husband Anton. After Edward gave me the house tour, his mother and I went outside for the campus tour. 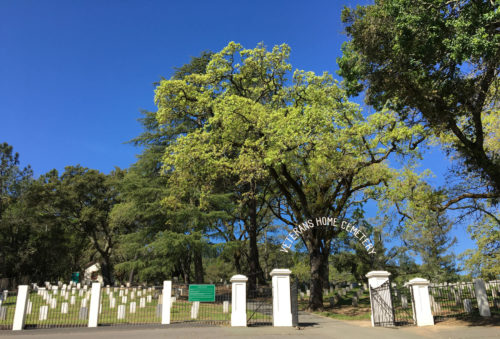 We moved slowly, both of us wearing bodies that do too much sitting at our jobs, climbing uphill to the old cemetery. I could see no evidence of the ferocious fires that climbed to the western hills above the property last fall; nor could I see any blackened earth across the valley where Mount Atlas rises into the sky. Two fires named Atlas and Tubbs sandwiched little Yountville, and California Department of Forestry firefighters came by land and by air to defend the veterans home.

After enduring that nightmare for almost two weeks, Ursula gathered the veterans who had been evacuated back under her wing and set about trying to calm the nerves of everyone on campus … including her own. 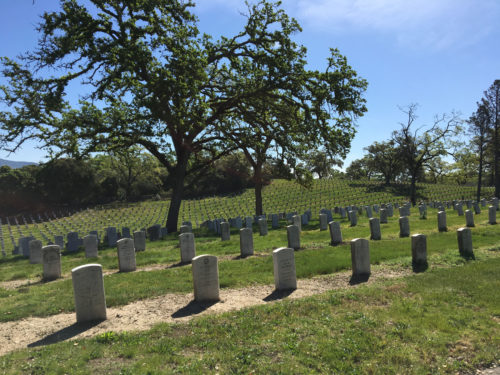 This day, as we walked together, slowly, thoughtfully among those honored dead, what we know and forget became obvious: life keeps going about living. There’s a Latin phrase about walking, too, I thought, about how it helps. And though I couldn’t summon it at the moment, we continued to walk beyond the symmetry of the cemetery, past row after row of white, rounded headstones, past the thigh-high new grass sprouting on rolling hills, the greenest green under trees beginning to leaf out again. Lupine and poppies, wild radish and mustard bobbed happily in the sun-sweetened breeze. We didn’t need jackets; in fact, we were sweating. We laughed about it: wasn’t it just days ago we needed to bundle up?

Tragedy seemed far away as Ursula told stories about the founding of the veterans’ home, the wall of framed uniforms from each of the major conflicts in which veterans had served, as she showed me the small reservoir where the firefighting helicopters scooped up water and zoomed off over the hill to deposit it on the flames.

And then, without my knowing how we’d gotten there, we were standing at the back of the building where five people recently died. 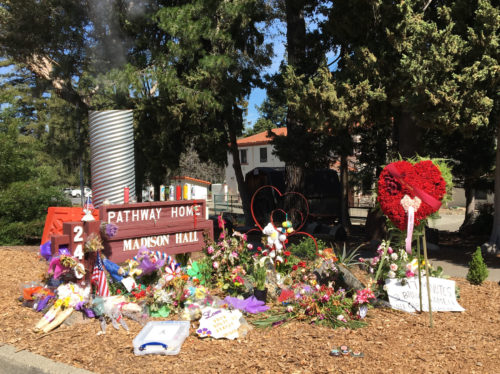 We stopped to take in the floral tributes, including a huge red-flowered heart with a ribbon that said, “Our Jenn”, and I knew that was for Jennifer Gonzales Shushereba, the mother-to-be, and that the pink ribbon draping from the center that said “Cecilia Rose” must have been her baby.

“They didn’t know the sex of the child until the autopsy,” Ursula said. “That’s when she was named.” 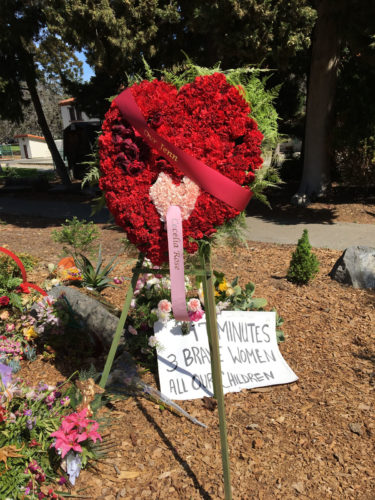 I looked at Ursula, mother of four, who had her first baby in a Russian hospital because she and her Russian husband were living there then. That baby is about to graduate from college and hopes to become a doctor. I’ve known Ursula long enough to remember her pregnant with Edward and Bridget. Those kids in utero came to writing classes. Now Ursula was calm, dry-eyed, though I knew that had not always been the case in recent days.

As we stood there, a man and woman came up to us and introduced themselves, two local Napa Valley-ites who had come to add to the tributes.

Laurie, who owns a climbing gym in Napa, had painted small flat rocks into lovely mandalas, one for each of the victims. Ursula and I peered at the rocks on the ground. Sure enough, there was a rock for Christine Loeber, the executive director of the Pathways program who was 48 when she was killed. 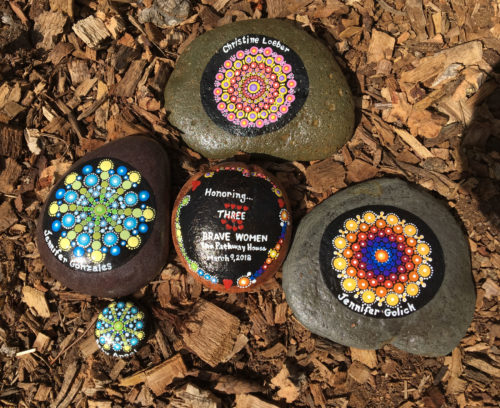 Another bore the name of Jen Golick, who was 42, the Pathways clinical director, and a third for Jenn Gonzales Shushereba.

Laurie and her friend Harrell had come this day to leave a fourth, smaller stone. “For the baby,” Laurie explained, as my eyes filled.

There were no tributes among the flowers and signs for Albert Wong, the killer, but I thought of him, too, as I stood there, trying to imagine that troubled, violent man. None of us mentioned him. I’m sure there’s more to his story that few know. There’s so much to other’s people’s stories we’ll never know.

Ursula and I thanked Laurie and Jim and bid them goodbye. And then we walked on.

It came to me then: solvitur ambulando. The Latin phase, attributed to Diogenes, translates to “It is solved by walking.”

I had no great things to offer my aching friend, but, as Mother Teresa said, I could do this small thing with great love: walk with her, listen to her talk, buy her a salad in town at the deli, walk back on campus and sit under that lovely quercus lobata to write. We pulled out our notebooks and wrote and wrote because it’s what we do.

And when we were written out, we read to each other, because this, too, is what we do. In the Amherst Writers & Artists method that I use and teach, we tell each other what we like, what stays with us, what is strong. I gave Ursula what was strong, what would stay with me about her good words, her powerful images.

I can’t share with you what Ursula wrote because we keep that private. But I can tell you that she wrote five short pieces to my one, which is not unusual for her, some of them sweet and funny. We both laughed when I, writing under the oak on a bed of fresh clover, got splatted with bird poop. “We’ll call that a small miracle,” I said, “because how tricky is it for one bird to hit someone sitting 30 feet below? A baptism of spring.”

And so it was — a baptism, this time of resurrection in the Christian tradition, of transfiguration from unexpected, horrific death. It is finally spring. We have weathered storms of fire and rain. We have suffered knowing that so many — some we know, some we don’t — have suffered, have been unfairly targeted, chased, killed. There seems no end to this loss, not to mention the deaths of loved ones through aging and illness. We watch our cities explode with protestors of all ages, shapes, sizes and colors. We raise our voices; we mourn our dead.

We keep walking. We risk hope. We risk love. Somehow we go on. 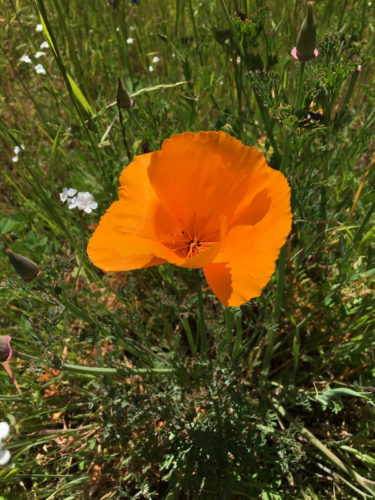