Staying Out Of Bad Neighborhoods

My mind is a bad neighborhood I try not to go into alone. Anne Lamott

It’s a scary world out there. Political battles, animal abuse, children dying of suicide and fentanyl-laced drugs, homelessness, depression, the Coronavirus. It’s enough to make you want close the windows, lock the doors and stay inside, although for too many people, their homes aren’t safe either.

Until cancer invaded our lives, “out there” was where all the scary stuff happened — on the roadways, in the “bad” neighborhoods, during the dark, in the wilderness. But once the killer shows up inside the house, there’s nowhere to run, nowhere to hide and nowhere to keep your family safe. When the latest scan showed significant progression, Jimmy’s numbness spread or the side effects forced him off the current treatment, the only refuge I had was my mind. There, I had hope. I had control. I could write my own script … his counts would come up tomorrow, allowing him to go back on the chemo protocol. The cancer would shrink in response to the next treatment. The numbness wasn’t really progressing; it was just in Jimmy’s imagination. In my mind, I could still envision a long, rich, full life for my beloved boy, one that might involve extended, continuous or even life-long treatment but one that had him here with us for years to come.

That world came crashing down after Jimmy died. The heart shattering pain of losing him. The soul crushing unfairness that he wasn’t going to be one of the ones who survived. The torment of telling people, or worse, running into someone who didn’t know and having to find a way to say that Jimmy had died without falling apart.  And the tasks .. so many tasks. Cremation arrangements, celebration of life plans, a slide show for the celebration of life, gathering up and disposing of all the medical supplies that we no longer needed.

Sleep would not come to me so I put off bedtime as long as possible. No matter how late I went to bed, I found myself laying there in the dark listening to the sounds of Dan’s breathing. My mind raced, replaying the choices we could have made, the way things could have gone, the enormous unfairness of it all. I couldn’t figure out how to re-write the ending or trick myself into believing that anything would ever be okay again.

As the weeks and months passed, my mind began to quiet a bit, allowing me to distract it with a good book, the scent of Jimmy’s favorite orange ginger hand lotion or the sounds of frogs singing in the dry creek bed in the front yard. My harsh inner critic stopped wagging her finger and accusing me of failing to save my sweet son. Slowly but surely, sleep returned. With that easing, came space for the “both and” … the ability to accept the reality that Jimmy was gone and the resilience to remember the beauty of our days together. To reclaim that merry, funny little boy who learned to write his letters in chocolate pudding on a cookie tray while wearing a swimsuit because somehow, he wound up wearing most of the pudding. To remember the sound of his laughter, the timbre of his voice, the strength of his hugs. To embrace the memories of our time together, even on the darkest days and feel with every fibre of my being how fiercely I loved him and know that he carried that love with him until he drew his last breath. 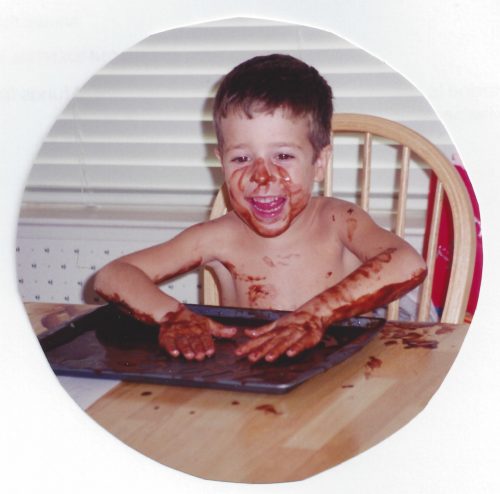