The Door Is Unlocked

Courage is what love looks like when tested by the simple everyday necessities of being alive. David Whyte

Last week, I rewrote and reposted a piece I crafted two years ago at the height of the pandemic lockdown. Stuck at home, battered and heartbroken by images of people dying painful deaths, prevented from being with their devastated families by the disease itself. Fires blazing in Northern California. Friends and loved ones either evacuated or sleeping with go-bags at the front door. The death of George Floyd. Tensions with Iran. The world was in chaos, and all I could think about was how little I was doing to make any real difference.

In some ways, so much has changed in two years, and in others, so little. I long to hear my father’s baritone, mellifluous and calm, reassuring me that the nation will survive. That this, too, shall pass. I close my eyes and try to conjure my mother’s cool hand on my forehead, massaging the back of my neck. Her quiet voice reminding me to breathe, that everything will look better in the morning.

Poet David Whyte says courage “is a word that tempts us to think outwardly, to run bravely against opposing fire, to do something under besieging circumstance and perhaps, above all, to be seen to do it in public …” We need people to fight for the rights we believe in and protest when they’re taken from us. Those with big platforms to stand up against gun violence, police brutality, racism and homophobia. Others with wealth to help feed the starving, provide shelter to the unhoused, teach those with no easy access to school, protect the land and its inhabitants. We all need to raise our voices and be part of the forces of change. But we need to show up for each other in small, quiet ways, too.

Sometimes, by focusing on the big and bold ways to take a stand, I end up giving myself a hall pass for avoiding the ordinary ones in my daily life. The opportunity to defend a friend or colleague who’s being unfairly attacked. Insisting on an answer by allowing the need to know what’s really happening to be stronger than the siren song of staying quiet. Facing the truth of a situation, how I’m being treated and how I feel about it instead of giving into the desire to belong.

Sometimes courage is asking the question no one else will pose. Being the only voice in the room to object. Continuing to excavate when everyone else wants the truth to stay buried. Pointing out that the emperor is naked, even as everyone else is admiring his clothes.

I think of my son Jimmy, skinny and bald, standing before a crowd, advocating for research, advocacy and support for cancer survivors. And then I remember high school. His refusal to drink or do drugs, how he begged his friends not to either. The way he was bullied and cast out by so many former friend for refusing to betray who he was. An agonizing reminder that even courage born out of caring can cost you dearly.

One of the hardest parts of being brave is drawing boundaries. Lines we won’t cross, places we won’t go, behaviors we’ll no longer tolerate. Holding firm when someone tries to convince us that it’s not that bad or that we just need to go along. 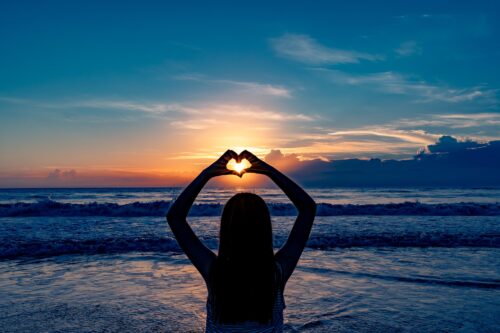 Ultimately, courage is all about love, the root of the word itself. Standing up for what we care about and speaking out about what could destroy it. Facing the truth, embracing the not knowing, creating space for people to be who they are instead of who we want them to be. Sometimes we get so caught up in complaining about the enclosure we’ve trapped ourselves in, we forget that the door is unlocked.

Thirty-eight years ago, I spent 60 hours over two weekends doing the est training. Among the insights that have stayed with me is the idea that we are not just a character in the story of our lives, we are the author creating the book. Not fully in control of everything that happens to us, but with more agency than we often are willing to admit or acknowledge.

I have been feeling caught of late in a prison of my own making. Bars built from the fear of being rejected, dismissed or cast out. So worried about the ramifications of leaving that I forgot to ask the most obvious question – why am I trying to stay?

Maybe it’s only when we realize just how small the space is that we’re trying to contort ourself into that we can see our way out. The life outside the room, the relationship, the marriage, the job. The forgotten power of a deep breath, a kind word, the space for both the deep desire to stay and the primal need to depart.

Jimmy was brave enough to walk into the fire and wise enough to know when to leave it. Braver than I will ever be, he lived with his heart open and arms wide, retreating only briefly when life or someone he cared about bonked him on the head. He believed in the power of saying “no more” and the freedom that came from walking away from anything and anyone that no longer brought him joy.

I take a deep breath, open the cage door and set myself free.