The Enormity Of The Room

I know it may sound greedy to want more days with a person who lived so long, but the fact that my mother was 92 does not diminish, it only magnifies, the enormity of the room whose door has now quietly shut. Stephen Colbert

My mother died the year after my son did. The decline in her health began the day she flew home from Jimmy’s celebration of life in Portland, Oregon. She was in and out of the hospital over the next year before she passed away peacefully at home a few days after her final hospital stay.

We were close always. Despite her age at my birth (39), she was remarkably open about people and their choices. She made space for idiosyncrasies, resentments, differences, a range of emotions, even rage. She forgave almost everyone, even those those relatives who treated her badly, family members who failed to understand the enormous efforts she went to to keep the peace, to heal the wounds, to bind us all together.

In her final years, we argued more than we had during the fifty or so years that had come before. I had few emotional reserves once Jimmy’s cancer returned and none once he died. I was often quick to get irritated with her, even over benign comments about why Persian cucumbers were better than the bigger ones.

Mom had a pre-cancerous blood disorder that had steadily gotten more aggressive and out of control, and I think she was in pain more often than she let on. She also lost some of her filter, making comments on occasion that she never would have uttered at a younger age.

Despite her advanced age (like Stephen Colbert’s mother, Mom was 92 when she died), she wasn’t ready to go. My father and her mother had both lived to be 102 1/2. Mom was still driving herself to exercise class, art class, memoir writing class and her friends’ houses. She took the train to and from Sacramento to visit when it was too hard to come and get her or take her back. She strolled her neighborhood, carefully watching her pedometer to be sure she hit her step goal for the day. She walked to the post office, to visit her sister, to check out open houses with her neighbor Kim, to look for the beauty of the seasons in her neighbors’ yards.

Family was all important to her, and there was nothing she wouldn’t do for me, my husband or our kids. Her greatest joy was to be with us, talking with Jimmy and Molly what they were interested in, watching Molly play softball, hearing about Jimmy’s classes at Stanford. She was often the quietest person in the room and the one that most people wanted to talk to. She listened well, focused fully on the person in front of her. Polly Pockets, Super Mario Bros, Hinduism, why Stanford was going to the Rose Bowl this year, the Electoral College, how to grow geraniums — she was interested in all of it. 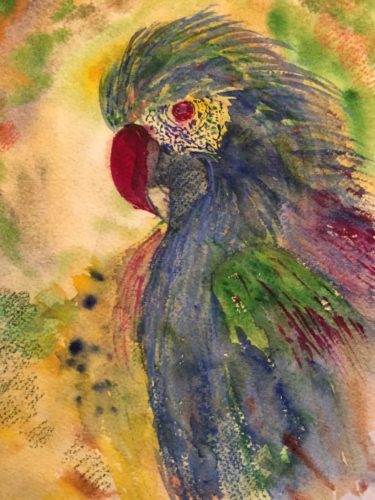 In her quiet way, she managed her time with a skill I can only marvel at. She entertained her friends, listened to operas, went to the movies, volunteered at the medical library, wrote essays for her memoir writing class, painted, sketched, gardened, conducted genealogy research on our family. She bequeathed to me a history of our family, full of anecdotes and memories I would otherwise never have known and huge boxes of her artwork — colorful seascapes of Bodega Bay, still lives of persimmons and other colorful fruit positioned with a purple vase or green Chinese bowl, pen and ink sketches of the guests on The PBS News Hour. Mom also left behind date books with daily notes and journals that have helped me piece together key happenings in the family. She saved every card my father ever gave her and, one of the most precious gifts of all, the card she and my father sent my grandparents in 1958 on the night they got engaged. She saved the letters I wrote her and Dad from Florence during my junior year abroad and the missives I sent about my time working at the Senate Budget Committee after college. She kept every card and piece of artwork the kids ever gave her, a collection that became even more precious after Jimmy died.

When we lose an elderly parent or grandparent, it’s difficult to capture the magnitude of the loss. The world’s message is often, “Well, she lived a long, full life.” In both of my parents’ cases, that’s hard to argue with. And yet … the hole they left in my life is vast and deep and painful. There is no one in my life who can stop my tears the way my mother could. She had an ability to bear witness to pain and ease it at the same time. Acknowledge its magnitude while offering hope that the light is coming. Even five years on, I find myself thinking “I must tell Mom about …” or reaching for the phone on a hard, dark day, desperate to hear her soothing voice. It might seem selfish, given how long she lived, but it is instead a gentle acknowledgment of the enormity of the room that is forever closed to me now.