The House Of Joy

We shake with joy, we shake with grief. What a time they have, those two, housed as they are in the same body. Mary Oliver

For the staff of Family House who made the joy possible

The MRI confirmed what we already knew. The cancer had spread further into Jimmy’s brain and spine, causing a host of new symptoms. Double vision. Numbness creeping up his legs. We were seven years into Jimmy’s cancer journey and had exhausted all conventional treatment options, leaving us with a Sophie’s choice of re-radiating his spine and parts of his brain or Hail Mary phase one clinical trials, none of which offered any efficacy against the amount of disease Jimmy now had. With the option of no more treatment on the table for the first time, my husband Dan and I took a step back and encouraged Jimmy to take the lead on deciding what to do.

After a conference call between the three of us and Dr. Nicholson, Jimmy settled on radiation. I began making plans to manage four weeks of living in San Francisco. Dan took a leave of absence from his job to stay home with our daughter Molly and get her to and from high school and softball practice while Jimmy and I moved into Family House, UCSF’s three-story temporary housing for 34 pediatric cancer patients and their families.

I dreaded the looming weeks. In addition to the usual health checks, Jimmy would need regular blood counts and frequent clinic appointments. I knew Jimmy’s bone marrow would struggle to hold against the daily radiation treatments which would put us in the pediatric neuro-oncology infusion room for long hours while he received much needed red blood cell and platelet transfusions. I railed against the brain cancer for forcing me to upend my life yet again as I canceled activities and time with friends. I resented having to leave Molly and Dan and the daily joy of being together under the same roof.

It was nurse Katie who first told us about Arizmendi Bakery in clinic the week before Jimmy started radiation. “Best scones ever,” she said. “And only a block from Family House. Actually, there are lots of great restaurants in the area. Make sure you go to Patxi’s for pizza and Manna for Korean food.”

The morning of Jimmy’s first radiation treatment, I woke up early, walked to the UCSF gym and worked out, stopping by Arizmendi on the way back to Family House. As Jimmy and I sat in at the kitchen table, overlooking the balconies, fire escapes and postage stamp patios of the neighboring apartment buildings, we discovered Katie was right. The scones were amazing. Dotted with fresh strawberries, warm and oozy from having just emerged from the oven, they were a perfect blend of tangy sweetness.

Well nourished, Jimmy and I walked the mile up to UCSF for his first treatment, laughing at how underdressed and unprepared we were for the chilly June weather in San Francisco. That night, we wandered over to Patxi’s for Caesar salads and deep-dish pepperoni pizza as we watched the San Francisco Giants lose badly to the Toronto Blue Jays on the big screen tv. 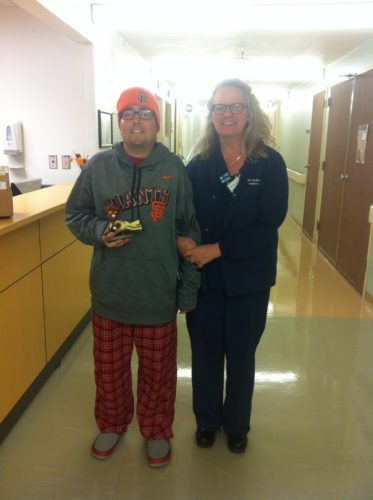 When Christina, the nurse at the radiation oncology clinic, discovered how much Jimmy loved the Giants , which wasn’t hard to figure out since he showed up most mornings wearing bright orange fleece pajamas with the SFG logo sprinkled across them, the two spent their time together dissecting the team’s performance from the night before. Upon learning that Jimmy’s favorite player was third baseman Pablo Sandoval, Christina brought in a bobblehead of Pablo diving for a ball and blowing a bubble with his gum at the same time and gave it to Jimmy.

Moved deeply by Jimmy’s joy at receiving the bobblehead, Christina called the Giants’ community relations department to tell them about her favorite patient and ask what they might be able to do for him. Later that afternoon, Bobby, the director of player, alumni and community relations, called her back, offering our family the box used by the Spanish broadcasting team who weren’t going to be at the game the following Wednesday.

Since Molly was in the midst of finals, she and Dan couldn’t come so I invited Jimmy’s aunt Janet, her daughter Delaney and Griffin, his best friend from Stanford. The three of them surprised Jimmy outside AT&T Park before we met up with Bobby who presented us with laminated VIP passes, took us to the third floor of the stadium and gave Jimmy a baseball signed by Pablo Sandoval

Jimmy was bloated from the steroids and exhausted by the radiation. Yet what I remember most about the day was the sound of his laughter as he sat with Griffin and Delaney, eating hotdogs and watching the game. The afternoon felt ordinary, one of hundreds that should have lay stretched out in front of him. 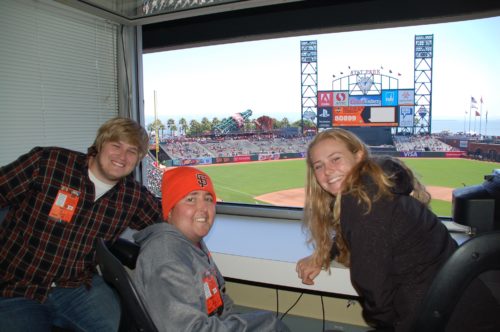 When Bobby discovered we were staying at Family House, he, too, recommended Manna for dinner. That evening, we ran into him there with his wife Casey and several friends eating steaming bowls of noodles. After that, Bobby joined us several times for pizza at Patxi’s on nights when Casey had to stay late at work.

Despite the progression of his cancer, Jimmy was still mobile and relatively healthy, other than the radiation-induced fatigue which had him first craving, then insisting on afternoon naps. A cheerful companion and lively conversationalist, Jimmy was up for anything. Unlike me, he didn’t love to walk but he enjoyed the time together and the opportunity to explore the neighborhood.

When the four-week stint at Family House started, I walked to and from the gym so as not to lose our prime parking spot near Family House. I walked to channel my rage and frustration that we were here, emotions that were easier to face than the fear that ran like a subterranean river just below them. I moved rapidly with my head down, raising it only to navigate the intersections. But Jimmy could no longer move as quickly as I did, which forced me to slow down and look up when we were together. To notice the charm of the Inner Sunset neighborhood with its small shops, carefully maintained apartments, and friendly residents.

The Family House staff were warm and kind, full of ideas and helpful suggestions. The building itself was small with a first floor office and staff apartment and two floors of slanting, narrow hallways with bedrooms clustered around shared bathrooms plus a kitchen and living room. Because of the considerate nature of most of the families, the house had a feeling of spaciousness that allowed for as much or as little contact with other residents as we wanted. Preferring the quiet, we spent most evenings in our snug, cozy room which quickly came to feel like home. I found myself focusing on the joy of being with my beloved boy instead of grieving for all that we were missing out on. Already close, we became closer still. Both night owls, we rarely went to bed before midnight although I learned to turn the light off well before I wanted to fall asleep as Jimmy saw the darkness as an invitation to share fears, worries and secrets he didn’t want exposed to the light of day … concerns about how soon he could return to college and when his mobility would return. Dreams about where he wanted to travel and what he wanted to do.

Time slowed as we settled into the daily routine of Jimmy’s appointments, meetings with his nurses and doctors who had become friends, long walks, delicious food, being together. It was a magical time, before the fall when the news grew dire and the world became smaller and scarier. How easy it would have been to get stuck in my sadness, my resentment, my anger and have missed it all. Instead, despite its frightening medical framework, those foggy summer days in the house of joy remain precious and dear, safely encased in my memories forever.