The Keepers of Our Memories

The life of the dead is placed in the memory of the living. Cicero

I grew up with two sets of parents — my own biological parents and my “second” parents, my dad’s niece Barbara and her husband Seymour. The four of them were best friends. Together, they formed a brain trust that could solve any problem, heal any wound and soothe any sadness.

Mom and Barbara shared a love of art, literature, classical music and collecting quotes (especially the ones coming from the smallest members of the family a.k.a. the “wisdom of children”). Dad and Seymour bonded over business matters, the law and politics. Mom and Barbara participated in a lot of political discussions; Seymour and Dad visited a lot of art museums.

Temperamentally, Mom and Seymour were more alike. Full of energy, quick to leap up from the table to grab a reference book (there were no computers or iPhones back then) or a missing condiment. They moved faster, often multi-tasked and were quicker to make a decision about when to leave or where to go for dinner. Dad and Barbara were more content to sit quietly and talk, read or watch the commotion. They were more deliberate and liked to focus on one thing at a time.

Seymour was the first to die at the age of 82, something no one expected given his health and energy level. My father, who was 101 at the time, was devastated, in no small part because he never expected to outlive his best friend. Dad died the following year. Mom died 12 years after that.

Mom was a genealogist, a memoirist and a labeler, something I failed to fully appreciate until after she was gone. Instead of an oral history of our family that depended on my faulty memory to pass on to Molly, Mom wrote most of the stories down in her essays. She labeled her parents’ and grandparents’ baby photos and the photos of long dead relatives that I might no longer recognize. She also spent time writing about my dad’s side of the family although there are holes in her narrative that she struggled to fill, in part because she didn’t meet my dad until he was in his late 50s.

The first time I visited Barbara after Mom died, I brought a stack of unlabeled old photos. She could identify many of the people in them, but even then, there were gaps in her memory. And for the first time, I realized that the last keeper of my family’s memories was slowly disappearing. 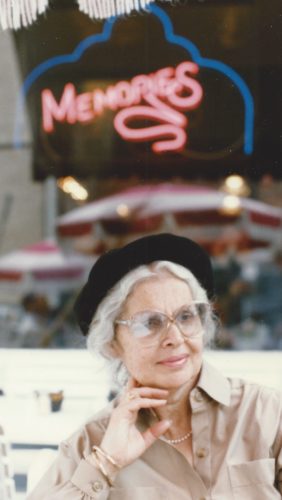 As Barbara’s memory has declined, she remembers less and less of the past. Initially, because the gaps were small and seemingly random, I got sad for me. I desperately wanted to know what I didn’t know, and Barbara was the only living relative I could ask. But all too quickly, I became sad for her and all that is now lost to her.

Every time I visit, the decline in Barbara’s memory is considerable. When I went last week, I was worried she might not recognize me, but she knew me immediately … greeting me by name … happy that I had come. While it was a joy to see her and a relief that she still knew who I was, she no longer remembers that my mom, her best friend is dead. I’m not sure she remembers the names of my children, and she doesn’t know that Jimmy died over four years ago. Her daughter and my beloved cousin, Judith, tells me that Barbara forgets that Seymour is dead and will ask where he’s gone or why he isn’t there with her. Because so much of her memory is gone now, it struck me how much harder it is to survive an unbearable loss when you don’t have much else to distract you from the pain or easy access to the happy memories of the time you spent together.

When I left, Judith gave me a thick envelope, full of cards and letters Barbara had carefully saved over the years, along with a few drawings Barbara had done of me. When I sat down to read this afternoon, I expected to find mostly handmade cards and pictures from my kids. But instead, the packet was full of lengthy, handwritten letters I had sent to Barbara and Seymour. From Florence, Italy during my junior year abroad. During the years I had lived in Washington, D.C. and worked at U.S. Senate Budget Committee. From my time in graduate school and the early years of my marriage, before Seymour got a computer, and we transitioned to email. 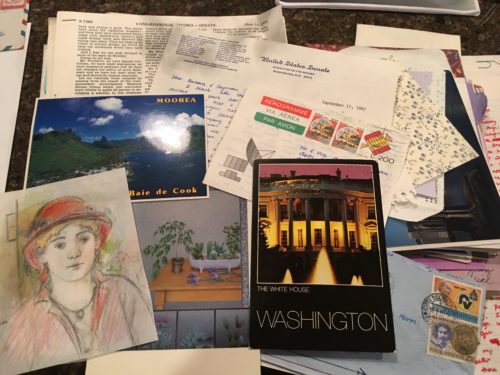 Out of these letters poured missing pieces of my memory. The name of the man I had dated in Washington, D.C. after breaking up with my last serious boyfriend before Dan. A list of the islands I had visited in Greece the summer after my time in Florence. The friends I had traveled with. The roommates I had lived with. The speeches I had given when I worked for the Budget Committee. The classes I had taken in graduate school and the details of an argument I had gotten into with an arrogant professor, now sometime MSNBC commentator, about the mistakes he made explaining how a bill moves through the Senate. It was all there. Names and memories I knew I had lost; others I hadn’t remembered at all. An extraordinary gift from my beloved “other” mother who gave me back my memories even though she can no longer remember them herself.