The Light Of Joy

…Maybe death isn’t darkness, after all, but so much light wrapping itself around us. Mary Oliver

It is waiting, waiting and more waiting. For your child’s name to be called, the doctor to show up, the scan to be read, the blood or chemo to arrive, the transfusion to finish, the discharge orders written. It is perching awkwardly in large open rooms with big TVs showing Disney movies on repeat, toys scattered on the floor. It’s seeing the other bald children and their petrified parents, their fear and yours mingling in the air around you. Fleeting smiles of acknowledgement and nods of understanding but no capacity to hold anyone else’s story or pain.

Cramped exam rooms where seconds pass like minutes, minutes like hours. Spinning stories of positive or fatal outcomes in your head as you wait for the doctor––his late arrival a sure sign of bad news. The dragonfly on your car mirror a harbinger that the tumor has responded to treatment. Grasping at superstitions in the hope that they can fend off an unbearable result.

It is being afraid every single waking moment, even when the news is good, the scan is clear and the side effects are temporary. The stark discovery that you never had the secret to keeping your kids safe. That despite your willingness to offer up your life for theirs, they can and may die anyway. 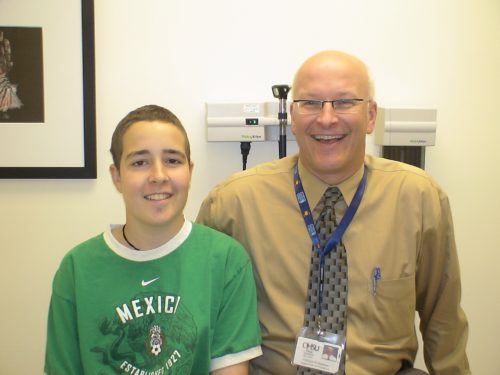 But even in those narrow sterile hallways and antiseptic rooms, the joy is there if you look for it. It’s the way your son’s face lights up when his favorite intake specialist calls his name at the door to clinic. Their cheerful chatter about Star Wars and superheroes. The sound of their laughter. It’s the expression on the pediatric neuro-oncologist’s face when he looks at your son with real love, knowing he is caring for your child as if he were one of his own. It’s the way your son’s favorite nurse works to minimize the pain of the port access. The smile that spreads across her face when he says, “Good stick, Katie!” It’s heated blankets out of the warming cabinets, quiet infusion rooms and graham crackers snacks.

It’s pausing by a friend’s son’s hospital room to watch him jump on the bed with his brother, tubes traveling up and down with him. The sound of his belly laugh bubbling into the corridor. The way the fierce hug from his mother when you meet at the coffeemaker makes everything better, even though it will never be okay.

It’s organic meals dropped off night after night on the hardest days, infused with love and healing. No conversation required, thank you’s not expected. A summer salad so beautiful and juicy you remember it still.

It’s walks and long talks with your son on the hill behind your house, late at night in the hospital, in the dim light of the car on the long drive home. Confidences exchanged, secrets shared, time together that wouldn’t have happened otherwise.

It’s 27 bald eighth grade boys and three bald adults, heads shaved in honor of your son’s radiation-induced hair loss. It’s toys and games for the Child Life program and over a quarter of a million dollars raised for the LIVESTRONG Foundation. It’s seeing your son receive his first yellow survivor rose for biking 40 miles just six months after brain surgery. The wonder of watching him find his voice at the age of thirteen and raising it on behalf of others. His grace and courage and the way he learns to savor every moment. It’s finding out that he was stronger, more resilient, more patient than either you or he ever imagined.

Prayer chains across denominations and around the world. Your boy’s name offered up by people you’ve never met that he doesn’t even know. Their fierce belief in health and healing wrapping itself around your family. No faith or devotion required in return.

There are the people you would otherwise have never met. The connection and closeness that comes when life gets real, and people are in danger of dying. The way those bonds strengthen and endure even as others wither when death exposes them for what they are.

It’s your family knit tightly together. Bonds cemented by trauma and tragedy, tacos and travel. A shared understanding of who and what matters most. Knowing that you got more days than expected even though it will never, ever be enough. It’s reaching for each other, making memories and magic until your child draws his last breath.

It’s the enduring love that runs between the two of you, channeled and fierce, even now, years after you had to say goodbye––the gratitude of having had him for 21 years far outweighing the grief and guilt of not having been able to save him.