The Mathematics Of Loss

But the truth is somewhere inside of me: there is no formula. We live and we are loved and we are gone. Kate Bowler

“Got some kids in heaven” read the caption at @NotWalkingAlone on Instagram. Above it, a photo of Eve with her blond Pixie cut, white teeth, warm Gingerbread brown eyes and a tattoo on the left side of her chest just below her clavicle that read Boys in Heaven. I reached out to her, asking if she’d be interested in allowing me to share her tattoo on Salt Water, along with a bit about her boys. She said she’d love to share, volunteering that she had a couple of tattoos for her kids and offered to send me all of them.

One by one the photos began appearing in my Instagram mailbox. The Ursa Major constellation in honor of Albert Andrew, Eve’s first son, who died of SIDS when he was two months and a day old and Bendigo Ray, Benny, who died at the age of four and a half after being hit by a car. Tivkah, the feminine form of hope in Hebrew. Eve’s life word written in her oldest daughter Rosa’s handwriting. A juniper tree with the phrase “No more a stranger nor a guest but like a child at home” to the right of it in honor of Rosa and her daughter Juniper who were killed when a woman drove head on into their van at 100 miles an hour. A vine with leaves and the numbers 2132, 11516, 1, 1692 and 63 woven in amongst the leaves. The number of days three of her children and two of her grandchildren lived including Gideon Bram, her warrior grandbaby who lived for a day. They mattered, Eve said. 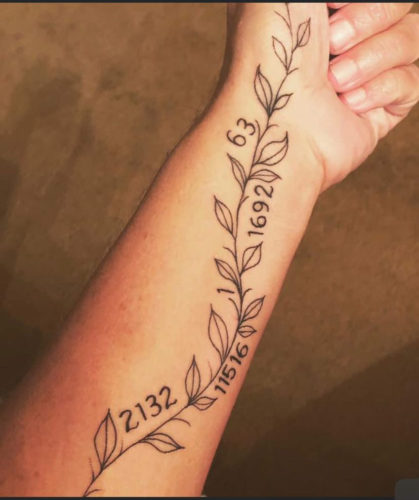 I cannot stop thinking about this last tattoo. About whose days I would count and how many there would be. About the way we ask each other “How long did your loved one live?” and then watch as the other person does some kind of quiet calculation using the answer.

If I tell you my father lived for 37,435 days, does his death and my grief no longer count because, really, who could ask for more days?

I do not know how to do the calculation for the baby I lost at 11 weeks. She counts, too, just as Eve said. But in the way that we measure our children’s existence, she lived for no days outside of me.

Kate Bowler calls these calculations the “math of suffering,” saying that our grief is rendered invalid with the passage of time. Yet if our little ones are taken from us in utero, or as babies or toddlers, other people will sometimes brightside our pain by suggesting that we can “have another one” as if our children were plug and play devices that we could remove or connect to our families interchangeably. Molly in no way replaces my baby girl who died, yet had she not died, Molly would not be here because we never planned to have more than two children.

In some ways, loss should be a straightforward equation. We were a family of three who was for 11 weeks and then for 21 years a family of four. Those minus ones were soul crushing. I do not have the formula to calculate the impact of losing five children and grandchildren. I only know that it is a complex calculus devoid of all logic and reason. That I do not know how a mother withstands that kind of incalculable pain. I cannot picture all the ways Eve’s heart must have cracked and fractured or how she has found the strength to patch the broken places so that she could go on the way she has.

I used to think that life was a balance sheet with puts and takes. Blessings, good fortune and happiness on one side. Loss, painful lessons and adversity on the other. That it would all add up in the end in my favor if I worked hard enough. I did not count on the inescapable math of tragedy, the way the death of my son and my baby girl mean the numbers will never, ever even out the way I had planned.

I do not know why children die. Or why some families suffer loss after loss after loss. But the surest way to turn our grief and pain into agony and despair is to start calculating whose lives matter and whose don’t. Let them count. All of them. From those that never drew breath to Betty White and my father. No matter how many days we get, it is never enough for the people who love us. We are forever hungry for more .. more conversation, more hugs, more laughter, more time.