The Statistics Of Hope

His ears were often the first thing to catch my tears. Elizabeth Barrett Browning

He came to us as ‘Ben.’ One of seven siblings rescued with his border collie mother from a high kill shelter in the Central Valley of California and brought to the Petsmart in Modesto for adoption. Smart, playful, energetic and adorable, he captured our hearts from day one.

Jimmy wanted to name our newest family member after Pablo Sandoval, third baseman for the San Francisco Giants at the time and his favorite player. The name fit as man and dog had similar personalities –– careening around the bases or the room, running as fast as possible, limbs akimbo, playing all out. But our black and white pup wouldn’t even turn his head in response to the name, so we called him Buster after the Giants’ catcher. 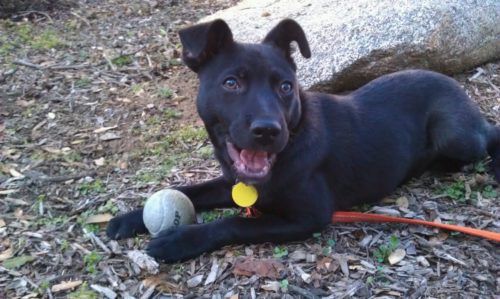 Buster was different in every way from Bronco, our beloved yellow Lab who had died in his sleep four months earlier at the age of 12. When we put Buster in a portable exercise pen for the first time, he scaled the three-foot-high metal fence to run after us. In contrast, Bronco was so mellow and content that he fell asleep in the vet’s hands during his first puppy check-up. Patient and friendly, Bronco tolerated tugs on his tail and little kids in his face. Barking only when the doorbell rang, we used to joke that if a burglar opened the door, Bronco would invite him in and offer up anything in the house in return for a belly rub.

The adjustment from Bronco to Buster was challenging, but we wouldn’t trade it. Heartbroken by Bronco’s unexpected death, Jimmy insisted that any new dog be nothing like “his” dog. On that score, Buster clearly fit the bill. Yet the two dogs are forever connected, as I discovered when applying for Buster’s first pet license that he was born on October 21st, the day Bronco died.

At eight years old, I still can’t describe Buster as calm. Routinely anxious about change or the need to get in the car, Buster is scared of men (we think he was abused as a puppy). No matter how much we reassure him, it can take several days or multiple visits before a male friend or relative can enter the house without Buster barking at him. Although quicker to catch on than Bronco, Buster’s determination to ignore the rules about not eating leaves or jumping on the bed taught us we weren’t the dog whisperers thought we were.

The silver lining to his nervous, wary personality is that just like Robert DeNiro’s Jack Byrnes in Meet The Parents, Buster has a circle of trust. Molly and I have been in the center from the beginning with Dan and Jimmy joining us shortly thereafter. Unlike Bronco, who would have gone home with anyone offering tasty treats, you’re in or you’re out with Buster. As much as he loves to chase and play with other dogs, he is anchored by and deeply connected to his human pack. 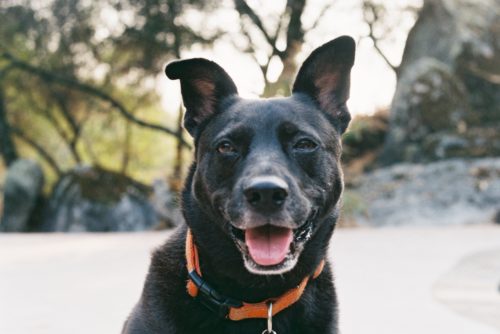 For more than eight years, I have loved Buster with every fiber of my being. In the early days, he eased my loneliness while Jimmy was away at college, Dan was traveling for work and Molly was focused on high school, friends and softball. Once Jimmy returned home halfway through his junior year, the side effects of chemotherapy too much to handle alone, Buster’s sock-stealing, couch-jumping, whip-around-in-circles antics provided a much-needed distraction from the relentless progression of Jimmy’s brain cancer. Although an eight mile walk only tires Buster out for an hour or two, he seemed to understand that I couldn’t leave the house during Jimmy’s final weeks and was content to curl up on the floor beside me we kept watch beside the bed.

After Jimmy died, Buster was the only breathing being who could get me to leave the house. Dan and I spent hours every afternoon hiking the horse trails with him, trying to exhaust our grief. At home, Buster became a small, dark shadow, following me from room to room like a toddler, sleeping at my feet while I worked, gently placing his head on my lap when I cried. He loves Molly and Dan, too, but I am his person, the one his eyes track, even as he snuggles with Molly on the brown La-Z-Boy recliner in the family room.

That’s how I knew something was terribly wrong when he couldn’t follow me up the stairs to my home office last Wednesday. We’d already made two trips that morning, but on the third trip, Buster wasn’t waiting at the top, having raced past me, determined to get there first.

When I looked back, he was standing at the bottom of the stairs, putting first one paw, then the other on the first stair, unable to move forward as his back legs buckled beneath him. Within a few minutes, he could no longer stand without wobbling or lurching to one side. Dan loaded his crate into my car, but when I picked Buster up, he yelped sharply so we brought the crate to him, helped him inside and carried him out to the car.

Buster rode into the local emergency animal clinic on a gurney, sitting up as he could no longer stand. After several hours, the vet diagnosed him with degenerative disc disorder. She sent him home in the late afternoon with pain meds and an anti-inflammatory, telling us to put him on six to eight weeks of bedrest, cautioning us to call immediately if his condition worsened.

By the time Molly and I unloaded him onto his bed at home twenty minutes later, Buster was paralyzed and panicked, his body coursing with adrenaline. As he lay on his side, back legs limp and unmoving, front legs stiff and straight, nose pointed up at the ceiling, I made a frantic phone call to the local vet who told me to take Buster to UC Davis as quickly as possible.

At 9:59 pm, my phone rang in the dark car where Molly and I sat waiting in the parking lot. The doctor’s voice was kind, but grim. “Buster has lost all deep pain sensation in his back legs which puts him in the most concerning category. Without an emergency operation, he will not walk again. But even with spinal surgery, the odds of him returning to mobility are only 50-50.” Because the situation was dire, we only had fifteen minutes to decide what to do.

We called Dan, who had remained at home to pack for an early morning business trip departure. The cost of the MRI, surgery and extended hospital stay was more than the yearly tuition at University of North Carolina, yet after all he had given us, we couldn’t imagine not providing our sweet pup the best chance possible for a full recovery. When my phone rang a few minutes later, I gave the ER vet permission to operate.

Dr. Amanda, the neurosurgeon, called at 4:00 am to say the surgery had been a success. “Now we wait,” she said. “We have two-weeks for the feeling to return to Buster’s back legs. Everything will come back in reverse order … deep pain sensation first, followed by superficial pain, then movement.” If nothing changed during that time, Buster was unlikely to walk again. Because the damage caused by the burst disc was both rapid and devastating, Buster was also at risk for developing myelomalacia, a condition causing necrosis of the spine. 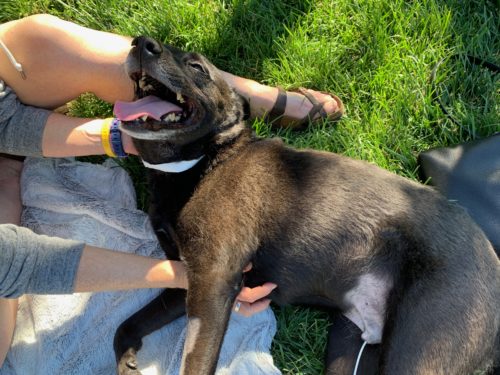 Time slowed in our too quiet house as we waited anxiously for the twice daily update calls from Dr. Amanda in the days that followed. With Buster still in the hospital, there was nothing to do but try to distract ourselves. I spent much of my time curled up on the couch binge watching Schitt’s Creek with Molly or pretending to work. I didn’t dare hope for a positive outcome yet I wasn’t morbidly convinced that Buster would die or never walk again either. I could only float in the limbo of not knowing and wait for time to reveal the outcome. With Jimmy dead, I couldn’t bear the thought of losing my furry connection to him. It wasn’t until Buster’s care team shared the good news four days later that Buster was no longer at risk for myelomalacia and his deep pain sensation had returned to his tail and both sides of his left paw that I started to believe he might be okay.

We are the lucky ones, part of the “good 50%” as Dr. Amanda calls it. Buster is young and strong. Based on the way he continues to improve, he should make a full recovery. I’m thankful that we could afford to get him the medical care he needed and deeply grateful that Dan and I were in agreement from the beginning that we had to try. But I also know how easy it is to wind up on the other side, no matter how promising the statistics. To be the data point that no one wants, the outcome that shouldn’t happen, the unlikely outlier. Jimmy had an 80% chance of surviving his initial tumor and going on to live a long, rich, cancer-free life. It only took one malignant cell to put him on the wrong side of those odds. The recurrence of his cancer and his death taught me that the only data point that mattered was Jimmy. Buster’s recovery has reminded me that survival is possible. That no matter how grim the situation, how bleak the outlook, people and pups do recover and beat the odds. Why not our sweet four-legged boy? Why not us?