The Story I Told Myself

Life doesn’t come with plots; it’s messy and chaotic; life is one damn inexplicable thing after another. And we can’t have that. We insist on meaning. So we tell stories so that our lives make sense. John Dufresne

My husband Dan had to convince me to leave our small community hospital the day after Jimmy was born. Tucked into a cozy birthing suite, a new concept back then, attended by kind nurses who answered any question and addressed any concern, I was reluctant to take our baby home. In truth, the thought terrified me. An only child, I didn’t grow up babysitting, and I am the only cousin my age in either side of the family. I’m sure I had been randomly handed a baby or two under close supervision while seated on a couch, but I had never been responsible for keeping a helpless being safe.

Jimmy proved to be a mellow soul with a ready smile who went willingly to other people and only required a few nights of wailing before learning to fall asleep by himself in the crib. The biggest scare he gave me as a toddler took place during a babysitting co-op party when Jimmy strode down the steps of a friend’s pool with all the confidence of a seasoned swimmer and promptly sank to the bottom. He’d been watching his little buddies get in and didn’t understand that the water wings they were wearing––and he wasn’t––were keeping them afloat. I was standing at the bottom of the steps, saw him walk in and fished him out immediately. It took close to a year of swimming lessons to convince Jimmy that he wouldn’t drop like a rock if he ventured near the water but what mattered to me was that I had done my job. I had saved him, kept him alive.

My cousin Ben once said that some parents have too much imagination and some don’t have enough. I am a worrier by nature so it was easy to envision all sorts of things happening to my kids whenever they were out of my sight. Time and life taught me that I couldn’t anticipate everything, but that luck or the universe would run point for me when I wasn’t there. Or so I thought until Jimmy was diagnosed with a brain tumor at the age of thirteen. Despite his raging headaches and my fierce contention that the pediatrician was dead wrong about the cause being teenage onset migraines, I never saw the cancer coming.

For seven and a half years, I clung to my superpower mom status, holding fast to the notion that by working with the best pediatric neuro-oncologists in the country and the smartest, most resourceful parents of children with the same kind of cancer, Dan and I could save our sweet son.

When Jimmy died eight years after his original diagnosis, I had to face the truth–that our lives are built of paper walls, just as author Kate Bowler says. That when it comes to the ordinary … picking up a baby, crossing the street with a toddler, holding our little ones’ playground pain … we can have a direct hand in how safely our children navigate the world. But in the face of so much else, even the most attentive parents are powerless to prevent tragedies from occurring. Life is unreasonably random. Much of what happens to our kids takes place out of sight and is often out of our control. Terrible events transpire all the time in ways we couldn’t stop even if we had access to a big red “rewind” button.

I entered the afterloss full of guilt and shame, unable to understand how or why this had happened to our family. We had been marked, singled out for this unimaginable blow. What had we done to deserve this? I wondered what was wrong with us, only to realize that since I was the mother who let this happen, there must be something wrong with me. By failing to prevent the unthinkable, I had allowed us to become every parent’s worst nightmare. The people to avoid at parties. The ones who could stun a new acquaintance into silence simply by answering the oft-asked question “how many children do you have?” 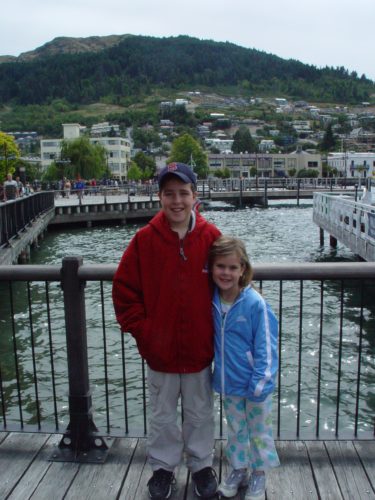 It took me a long time to find and face the truth … that we were just an ordinary family who had something extraordinarily horrible happen to us. I didn’t have the power to cause Jimmy’s cancer any more than I had the power to cure it. My guilt over being unable to save my son was based on a lie, a vision of myself as a mother with influence and control I never had. No parent does. But it’s scary and uncomfortable to admit just how little agency we have over so much of our children’s lives. So instead, we weigh ourselves down with self-reproach, remorse, regret and rage, blaming and berating ourselves for outcomes we could never have prevented in the first place. We demand to know why and who and how in situations where no reason exists, and no one is at fault. We might be expected to recognize the line between reasonable risk and recklessness, but we can’t always know what’s around the corner or in the drink or who else is on the road.

We were never bulletproof. No family is. We weren’t even special, just loving and occasionally lucky. I mistook our lack of catastrophe for a form of protection against it. After Jimmy’s cancer recurrence and death, I had been so fixated on “Why us?” that I had forgotten the afternoon when Jimmy responded to my unanswerable question by putting his arm around my shoulders and saying softly, “Why not us, Mom?”

Buried in my own grief, I had stopped believing what I knew to be true … that my love for Jimmy was stronger than my grief and all the tormenting emotions it inspired. Just like my heart, it beats on, steady and strong. Doing my best as a mother never meant saving his life. It meant showing up, protecting him when and where I could, speaking up when he wasn’t able to, loving him fiercely and finding a way to allow him to keep living until he drew his last breath.