The Way The Future Looks Now

There are two kinds of daily life — the life in time and the life in values: something which is not measured by minutes or hours, but by intensity, so that when we look at our past, it does not stretch back evenly but piles up into a few notable pinnacles, and when we look at the future, it seems sometimes a wall, sometimes a cloud and sometimes a sun, but never a chronological chart. E.M. Forster

When Jimmy was three years old, his best buddy, Blake, came down with the chicken pox. The two had taken a bath together at their last playdate, only days earlier, so I was pretty sure that Jimmy was going to get them, too.

Dan and I were scheduled to leave two weeks later for a corporate sales trip in Hawaii, my first real time away from Jimmy. With five days on the beach beckoning to me and no little person to be responsible for, I was desperate to go.

Jimmy managed to thread the needle perfectly, coming down with the chicken pox exactly seven days after Blake and recovering almost completely before my parents, both of whom had had the chicken pox, were scheduled to arrive to stay with him while we were gone. 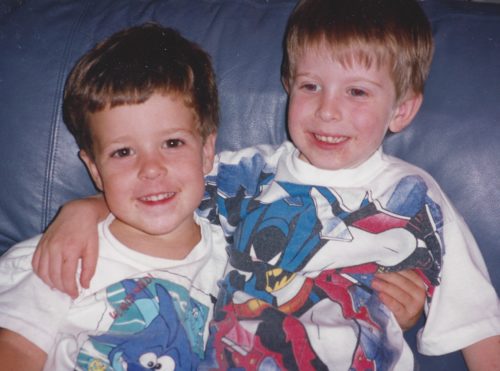 The tricky part of the equation was me. I had been at the ob/gyn’s office a few weeks earlier and had mentioned that Dan and I were planning to start trying to have another child. Dr. Lynch asked if I had had the chicken pox. I knew I’d been exposed by my childhood friend, Lorna but couldn’t remember if I’d come down with them or not. Because of the damage chicken pox can do to a fetus, Dr. Lynch ordered a blood test to find out. The results revealed that I had no antibodies to chicken pox.

I remember willing my body to fend off the disease, running more miles than normal, drinking lots of water, eating extra fruits and veggies. Doing anything and everything I could think of to be able to go on that trip. And somehow it worked. I came down with just two spots — one on my head and one on my chest. The doctor had no explanation for how I’d managed do avoid a more acute case, but he gave me his blessing to go on the trip.

I remember that notable pinnacle so clearly because at the time, it confirmed my unexamined belief that I could protect myself and the people I loved best from bad things happening to them. Like my father’s colon cancer ten years earlier which was removed in a single surgery, required no chemotherapy or radiation and never recurred, I naively thought doing your best to live a good life, being tough and taking care of yourself was enough to fend off any nasty, awful stuff life could throw at you.

That world view shattered the night Jimmy was diagnosed with a brain tumor and again when the cancer recurred. I learned that no amount of prayers to the universe, sheer will, exercise, fruits & vegetables or water could prevail over a dark force like cancer. I couldn’t prevent the disease from taking my sweet son or my beloved mother a year later.

Right after Jimmy died, I ricocheted between rage that I couldn’t keep my family safe from the evils of the world and despair about how vulnerable we all are. It took several years to find solid ground again where I could acknowledge that I had never had that superpower, despite having fended off the chicken pox somehow. That we are all just one telephone call or diagnosis away from having our lives turned upside down and that the people like me who are walking around thinking they are privy to a secret the rest of us don’t know just haven’t had the phone ring yet.

This realization has changed the way I look at the future, just as Forster said. Sometimes it looks like an impenetrable wall that I can’t climb or make my way around … and then a door will open. At other times, the future is cloudy and full of uncertainty … and then a path will emerge. I’m learning to love this way of living, forgiving myself for what I can’t fix or change while holding fast to the hope that everything will turn out, if not as I wanted it to, in a way that I can live with. I’m learning to savor those magical days when I hit every stepping stone just right as I cross the river and to trust that on the days I fall into the water, I’ll have the strength and the courage to climb back out and begin again.