I am large. I contain multitudes. Walt Whitman, Song of Myself

In 2015, a team of pathologists in the Netherlands released the results of a study they’d conducted on tissue from 26 women who had died during or just after a pregnancy. All 26 had been carrying sons. The pathologists were searching for Y chromosomes, evidence of the presence of male cells in their mothers’ bodies.

The results were stunning … every sample tested held Y chromosomes, and these chromosomes were present in every organ the scientists examined – kidneys, brain, stomach, liver and lungs. The theory is that female fetuses do this, too, but it’s harder to distinguish the cells of a daughter from those of the mother.

Researchers have come to believe that this phenomenon is common. However, these migrant cells don’t just float aimlessly around a mother’s body. They become beating heart cells. They protect against diseases. When she has an infection or injury, they rush to the wound or site of the inflammation to speed up healing.

Women acquire these fetal cells as early as seven weeks into a pregnancy. Some of them disappear over time, but many stay for a lifetime. A 2012 study that looked at the brains of 59 deceased older women found Y chromosomes in 63% of them, including a 94 year old.

With each successive pregnancy, a mother acquires new fetal cells, resulting in a reservoir of foreign material that becomes richer and more complex over time. And, because these cells travel back and forth across the placenta, cells from an older sibling can transfer to a younger one. In fact, some researchers believe that mothers’ bodies purposefully retain these cells in order to improve the odds of successful future pregnancies.

Scientists call this phenomenon fetal microchimerism. Named after a fire-breathing she-monster in Greek mythology with a lion’s head, a goat’s body and a serpent’s tail, chimera refers to the three unique cell populations a woman carries – her own, her mother’s and her children’s.

When my son was born, the magnitude of his arrival hit me full force. “Now I am a mother,” I thought as I stared as my dark haired, bright-eyed baby boy. When it came time to go home, Dan struggled to motivate me to pack up so we could leave the birthing unit. Eventually, I had to confess that I was worried about taking Jimmy home. Afraid of something happening to him. Of not being ready to parent. Of making a significant mistake.

Although this discomfort faded within a few days, I never fully lost the nervous undertone to my parenting. I had a habit of fretting, of fixating on what could go wrong, no matter how long the odds. Both Jimmy and his sister Molly would roll their eyes whenever I asked what became known as Mom’s favorite question – “What’s the worst thing that can happen?” They learned to ready their arguments in advance for why that worst thing wasn’t going to happen, and they should be allowed to go here, do that or hang out with a certain friend.

In those early years, I didn’t know enough to worry about what could really harm my children. Instead, I fretted about what I could see – a careless parent, a smart aleck peer, a coach with a short fuse. I thought my kids were a sure thing, a given. Solid and real and here. I never saw the brain cancer coming.

After Jimmy died, I searched desperately for signs of him, for proof that he was still here somewhere, even if I could no longer see him. I read and re-read the NPR piece about why you want a physicist to speak at your funeral because he will explain the law of conservation of energy, the idea that energy cannot be  destroyed so your family knows that your energy is still present in the universe. That our energy is given off as heat and yours is still here. That the photons you emitted were gathered in our particle-detecting eyes. I drew comfort from the idea that Jimmy’s energy is all around me, that I carry his photons in my eyes. It was something to hang on to in those painful early days. 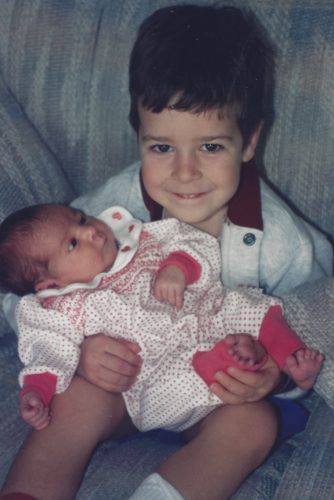 As time goes on, I feel Jimmy’s presence more and more as memories of our days together arrive unbidden. Reminders of what he loved, what made him laugh. A sense that I carry him with me in everything I do. Influenced by his kindness, inspired by his courage, buoyed by his love, Jimmy is woven into my life. Saying his name out loud has once again become as natural as breathing.

We carry our children for as long as nine months. If we are unlucky enough to outlive them, we bear their loss in our bodies. Weighted down by grief, our hearts crushed by the pain of their absence. Every year, as the anniversary of Jimmy’s death approaches, I feel the impending date in my bones long before I remember why I’m hurting.

Learning that I carry Jimmy’s cells deep within me is an unfathomable gift. And not just his, but my mother’s, Molly’s and those of the baby girl I miscarried at eleven weeks. Even more stunning is the discovery that Jimmy helped make Molly’s life possible, as the cells from the oldest child support the successful pregnancies of the siblings who come after him.

For twenty-one years, I did everything I could to protect my son and keep him safe, never realizing that he was and continues to do the same for me. Fending off cancer, warding off Alzheimer’s, strengthening my immune system, healing my wounds, keeping my heart beating. The signs of his presence and unbounded love were here all along. I just didn’t know where to look.