Writing as healing after a loss

Jan Haag is a retired writing professor in Sacramento who taught journalism and creative writing for more than 30 years. She’s an instructor who trains other to lead writing workshops in the Amherst Writers & Artists method, and holds her own in-person and online writing groups. She’s a novelist, poet and essayist, as well as the editor of AWA Press and co-publisher of River Rock Books. For information about writing groups and workshops, contact Jan at janishaag@gmail.com

The act of writing is a tremendous adventure into the unknown, always fraught with danger. But the deeper you go and the longer you work at your art, the greater will be your treasure.

—Pat Schneider, Writing Alone and With Others

One of the ways you know you’re a writer, I’ve told people for years, is that when something monumental happens in your life, you go for the pen and paper… or nowadays, perhaps, the keyboard or the phone… to write it down. You process things on the page; you often don’t know what you’re thinking or feeling exactly until you pull it out of your head, watch words forming on paper or pixels, get it out of you so you can, perhaps, rest a bit.

This happens with painters and sculptors, musicians who play and compose—artists of all types. But I’m one who goes to the page—always has—especially in times of difficulty or grief. It’s part of what led me to become a writer, a poet, a journalist, a writing professor and writing workshop facilitator.

After my husband died in 2001, the only words to came out of me stuttered into really bad drafts of poems. Over time, those poems improved and eventually became my first book, “Companion Spirit.”

Three years later, soon after my father died, I attended my first Amherst Writers & Artists workshop in Sacramento. Lawrence (Chip) Spann started Sutterwriters at Sutter Medical Center using this deceptively simple practice created by Pat Schneider in Amherst, Massachusetts. As a longtime writing English/journalism/creative writing professor at Sacramento City College, I’d led my share of writing classes and workshops. But there was something in the simple brilliance of the AWA method that, after attending several sessions, struck me.

No one was “teaching” anyone to write, but in the sheer act of responding in writing to prompts and receiving feedback on what listeners liked, stayed with them and was strong—people became better writers.

This turned my notion of teaching writing on its ear, though I’d never been a beat-’em-up writing professor who took a verbal (or red pen) whip to students’ papers.  I’d long known that encouragement works much better than instilling fear in writers of all ages and abilities. But I also saw something else happening in the Sutterwriters workshops. Though the AWA method doesn’t include this in its essential affirmations, for many people around the table, this form of expressive writing became a healing practice.

Sutterwriters groups were centered in the Sutter Cancer Center, so many participants were coping or had coped with cancer, had lost or were losing loved ones. (The groups were open to the general public, too.) Writing about their loss and sorrow seemed to help ease people’s pain, even when tears came in the writing or optional reading aloud of their pieces. They wrote about other things, too, but most did not consider themselves “writers.” Pat Schneider stresses in her book Writing Alone and With Others, “A writer is someone who writes”—not someone who is published or famous. With a little practice, their confidence grew, and novices truly began to see themselves as writers. 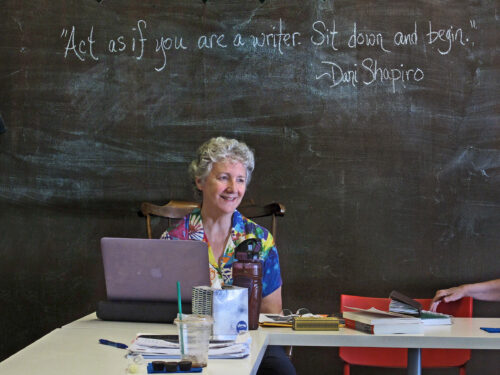 With Chip and Pat’s encouragement, I completed the AWA facilitator training and created a class at Sacramento City College called “Writing as a Healing Art.” The first semester I taught the Saturday morning class, in an old portable building on the edge of campus, 40 people showed up. Stunned, I made urgent calls to Sutterwriters colleagues asking some to serve as guest facilitators so I could divide the class into smaller groups. They did, and that gave birth to what one of my writing friends called Team Haag.

Though the class was not offered every semester, I continued to lead a Saturday morning writing group in the old portable. I invited former students and friends to come write, until I moved the group to a midtown Sacramento loft that I still use.

What I’ve learned is that every writing session turns, sooner or later, into a reflection on grief and loss. Someone needs to remember a dead loved one because, perhaps, of an anniversary or a memory that’s just popped up. Or they’re coping with a difficult transition in their lives—an aging parent or one who is ill. Or, as happened with my Writing as a Healing Art students in the spring of 2020, a worldwide pandemic shut down life as we knew it.

Sent home in mid-March, I held Zoom sessions every Thursday night through the end of the semester, and some students showed up online—bored, scared, stuck at home, maybe in their childhood bedrooms—and boy, did they need to write. We all did. We poured our fears and anxiety onto the page because, as I often say, the page can take anything you need to put on it.

In the summer of 2020, as I labored to recreate all my classes on an online platform, I held three online writing groups a week for anyone who wanted to come—for free. They came, they wrote like angels, they cried. I cried and wrote and read, too, as the method requires of facilitators. If it wasn’t exactly writing as healing, it certainly was writing as coping, and it worked.

It still works. Though I again hold live-in-the loft writing sessions, it’s delightful to see faces of people across the world onscreen, including writers from Ireland and Tel Aviv, who stay up late in their time zones to participate in my late morning online sessions from Sacramento. 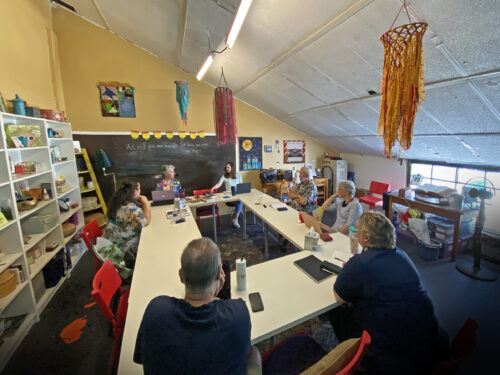 Psychology professor and researcher James Pennebaker has done groundbreaking work about using expressive writing to heal trauma, detailed in his book Opening Up: The Healing Power of Expressing Emotions. In controlled experiments, students at Southern Methodist University in Dallas wrote about traumatic events in their lives. Over a few months of regular writing the students reported that they felt better. The more detailed, compelling, vivid and lucid the writing—in other words, the deeper they plunged into the events and emotions—the more health and emotional benefits they got from the process.

“A healing narrative renders our experience concretely, authentically, explicitly and with a richness of detail,” says Louise DeSalvo in her book, Writing as a Way of Healing. “It tells precisely what happened. It is accurate. It is rooted in time and place. We describe things in a way that is uniquely, authentically ours; our narrative can’t sound as if anyone else could have written it. And we do this even if our subject is difficult.”

In addition to my other writing groups, I also lead a monthly in-person writing group in Elk Grove, California, using the AWA method for a nonprofit called Together We Heal. It’s one of many free offerings that founder Jill Batiansila has for people who are grieving. She and a team of volunteers grow flowers in season on an Elk Grove farm, then cut, arrange and deliver them to those in need. During the height of the shutdown, they took flowers to caretakers, dispatchers, all kinds of helping folks. They continue to provide jars of free flowers to anyone who requests them.

Though in that group I rarely give specific prompts about death or grief, the topics arise naturally. “Write what needs to be written,” I always say. “Feel free to ignore the prompt, if you like.

“I promise you’ll feel better,” I tell those who are nervous. And it’s true.

Virginia Woolf, who struggled all her life with issues caused by childhood abuse, wrote, “It is only by putting it into words that I make it whole. This wholeness means that it has lost its power to hurt me; it gives me, perhaps because by doing so I take away the pain, a great delight to put the severed parts together. From this I reach what I might call a philosophy: that we—I mean all human beings—are connected with this that the whole world is a work of art; that we are parts of the work of art.”

This website, Salt Water, is testament to that—created by a grieving mother as a place for anyone wanting to write about some of the most difficult things we have to live with. People write their hearts out, turning grief and loss into art. And when that hurt gets transformed, little by little, almost magically, into poems or stories, paintings, drawings, music, and we share it with others, it helps us heal, word by word.

As Canadian poet/novelist/essayist Margaret Atwood writes in her poem, “Spelling”:

It so is. And committing those words after words to the page can also, in my experience, and that of so many writers, help us heal—or at least soften—the hardest losses in our lives.