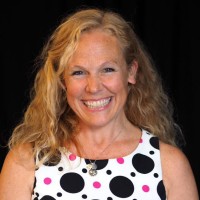 Finding What I Left Behind

I sat across the table from my aunt and uncle, who had come to visit my mom. They had offered to take me out to dinner, and we were enjoying a lovely meal.

“We want you to come to Hawaii and stay with us when this is all over,” said my aunt to me. “Thank you for the offer,” I said, “but I don’t think I’ll be coming to visit anytime soon,” and continued to eat my salmon.

I glanced up and caught them exchanging The Look.

Puzzled, I continue to eat in silence. What did they know that I didn’t? After all, I was my mother’s primary caregiver, and I had spent the last eight months entirely devoted to helping her recover from her cancer. They didn’t know what they were talking about.

Boy, was I ever wrong.

That dinner took place at the end of July, and she died three days before my dad’s 50th birthday at the end of August. She was 49, and I was 22.

I am now almost the age she was when she died. How have I survived the last 26 years? Honestly, I am not sure. I still miss her as much now as I ever did.

Initially, I thought for sure that I would dream about her all the time and have conversations with her in my sleep; I would turn on the radio and her favorite song would be playing; or she would drop flower pots on my head. You know, fantastic messages from the beyond, to let me know she was still around and with me always. We were incredibly close, and I had been her nearly constant companion for the last nine months of her life, and so of course, I would get the cool otherworldly connection.

I think I’ve dreamed about her a handful of times in the last 26 years, and I maybe hear a song she loved once in a very great while, and she’s never dropped a flower pot on my head, much to my great disappointment.

This left me with a great deal of sadness and loss to work through for the most part on my own. It felt like Dante’s Purgatory, where I was stuck swirling in an abyss of sadness and at the same time, forced to go on with my life, because after all, I was 22! I was a recent college graduate, and the world was my oyster, right?

So I ran away.

I moved to San Diego from Portland, Oregon, thinking that being far away from home in a new culture would help. I wouldn’t be faced with all of the things she loved on a regular basis, all the things that reminded me of her, and that would be better.

Actually, I found that not only did I miss her just as much, but I also missed all the things I loved about home, too. The other interesting thing I found out was that when I visiting home, the raw pain I thought I had left behind by changing location hadn’t changed an iota. It was there, just waiting for me to do something with it.

This was driven home when I read Into Thin Air by Jon Krakauer. At the beginning of a chapter was a quote by Tom Hornbein: “But at times I wondered if I had not come a long way only to find that what I really sought was something I left behind.”

So I eventually moved home, and ran. Literally. My counselor years later told me that bilateral patterning (e.g., running, swimming or biking) allows both sides of your brain to talk to each other, and you can slowly process thoughts and then, most importantly, release them.

Another cathartic activity I tried (and I don’t know your belief system, but this worked for me) was to have occasional sessions with my intuitive counselor. Her old job title was psychic (just like all professions, there are talented ones and phony-baloneys), and she changed it because she told me she wasn’t predicting the future; instead, she was reaffirming things I already intuitively knew. I usually didn’t have questions for her, but this time, I wanted to know why I never got any flower pots dropped on my head. I didn’t understand. My brother had dreams about mom, and he got to talk to her! I was so jealous.

This is what she told me: “Laura, your mom knows that the pain of separation is very great. She knows that every time she would come to visit would also mean that she would have to leave again, and that leaving causes extraordinary pain. Instead, she has created a giant tube of protection and love around your house, and she really is with you always. She never leaves, so you don’t have to feel that pain over and over.”

Aaaah. I get it now.

One final thing that I treasure is the journal that someone suggested I start when she died. I would stream-of-consciousness write down memories that we made and thoughts that I had and inspiration that I derived from doing things with and for her. I wrote down the occasional dream that I had as soon as I woke up, or something that I tripped over that jarred a memory. I still add to that journal and relish looking over the pages I wrote years ago, because I do forget a few things, even though I swore I would never forget anything! 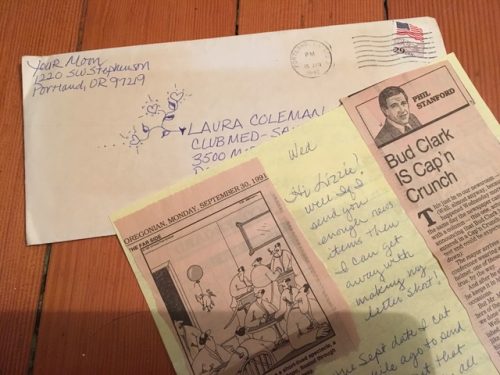