All I Will Never Know

Soon after the governor issued his shelter-in-place order, Dan, Molly and I found our rhythm in the house together. Working away during the day, gathering at night for dinner and conversation or takeout and a few episodes of Dead To Me, I’m Sorry or whatever show we were binge-watching. We set up our work spaces and retreated to our separate corners – Dan in the guest room, Molly in her room, me in Jimmy’s room.

Instead, I found the evidence of his life reassuring, comforting, solid. Proof that despite being far too short, Jimmy’s life was rich and full all the same. The top three shelves of his bookcase are crammed full of sparkly medals, oversized trophies and photos of him playing soccer, baseball, basketball. The Unbeatables, the Vipers, the Grease Monkeys (sponsored by Vic’s Auto Center in Lake Oswego). I remember the joy Jimmy found on each of these teams. The camaraderie, a new friend, a top secret play known only to his teammates and coaches, the thrill of winning, the solace of ice cream after a crushing defeat. 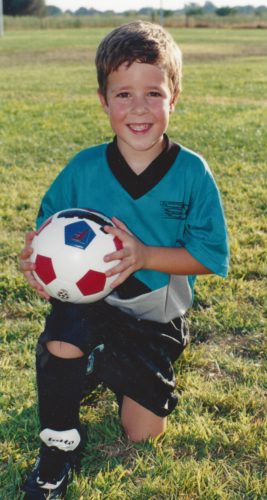 Jimmy’s beaming face on the front of a Wheaties box reminds me of the many photo orders he carried home after the first days of practice for each new team. The minimum order of a team photo plus player photo all the way up to elaborate, expensive packages with trading cards, refrigerator magnets, key chains, magazine covers, wall plaques and oversized posters. I said ‘no’ to all but the cheapest option except during the fall of eighth grade when he played for the Space Cadets.  The team he loved best. The last one he played on with no symptoms of the brain cancer or ensuing harsh treatment. I remember his quiet determination to win the starting goalie job. How much he loved Coach Dave. Seated in the team photo next to his best friend, Willie. Goalie gloves on. Huge smile on his face. His beautiful life laid out before him. The season none of us wanted to end.

Thank goodness the team photos are labeled or I’d have trouble pulling the names of many of his teammates from the recesses of my memory. And yet I remember so much. Which teams he loved. Which ones were a disappointment. Why he stopped playing baseball after Coach Russ stuck him in left field, handing the job of third base to his neighbor’s lethargic son instead. How much Jimmy loved running with me to prepare for his 7th grade cross country team, only to discover that the prospect of competing in the weekly meets made him nauseous and terrified. The way his golden season with the Space Cadets gave him the courage to compete for starting goalie on his high school freshman soccer team, despite having weathered an emergency craniotomy, six weeks of cranio-spinal radiation and three rounds of chemotherapy.

How small and young his teammates are in the photos. Yet they look so much like the young men they were lucky enough to grow up to be. 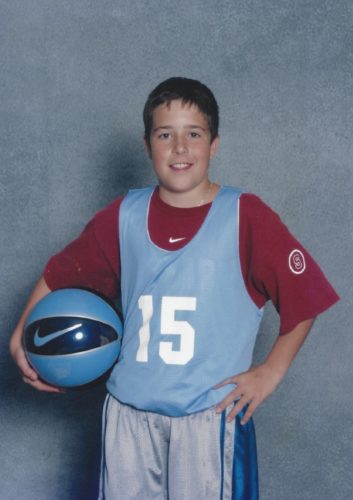 Still, there’s so much I can’t recall about those days. Why Jimmy disliked one of his teammates so much that he scribbled over Conner’s image in the Waluga Junior High School 7th grade basketball team photo. Had Conner refused to pass the ball? Made disparaging comments about Jimmy’s shooting ability? Or was he simply unkind, a behavior Jimmy despised and wouldn’t tolerate, even from a young age. I will never know for I cannot ask him.

I stare at these photos trying to piece together Jimmy’s life, our days together. What the teams and his teammates meant to him. How they shaped his life, how they shaped him. What he learned about himself and his friends. The ones who let him down, the ones who enriched his life. So many small questions, and Jimmy is not here to remind me of the answers.

What I know is that I was there for it all … the victories and the defeats, the tears and the laughter, the sunny fall days and the freezing Oregon rain, the athletic prodigies whose fathers had already chosen number for the backs of their New York Yankees jerseys and the kids who preferred to pick daisies instead of chase the ball. The friends that weren’t and the ones who stayed with him until the end. I shudder to think of all I would have missed if I hadn’t shown up and kept my eyes open. Each game, each goal, each ordinary memory might not have seemed like much at the time, but they mean everything now.