Mr. and Mrs. Brown first met Paddington on a railway platform. In fact, that was how he came to have such an unusual name for a bear, for Paddington was the name of the station.Michael Bond

I grew up with Paddington the Bear, that endearing, accident-prone, sweet-natured hero of more than two dozen books. When I was little, my mom read the books to me, and then I re-read them on my own when I was older. I had a stuffed Paddington Bear (of course ..) and another one when I was a freshman in college. That Paddington had a few more adventures and got a little rougher treatment. Freshman dorms are like that … 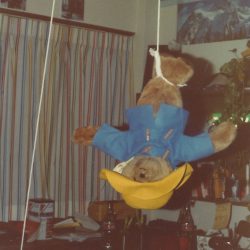 When we first meet Paddington, he is seated with an old leather suitcase, wearing a tag that says: “Please look after this bear. Thank you.” His aunt Lucy put the note on him before she moved into the retirement home for bears in Peru and told Paddington to emigrate to London. While Mrs. Brown waits for their daughter, Judy, to arrive, Mr. Brown goes to the cafeteria with Paddington to buy him a snack. Only after it’s too late does Mr. Brown realize that he has made a mistake when Paddington asks if anyone would mind if he stood on the table to eat.

“Before Mr. Brown could even answer he had climbed up and put his right paw firmly on the bun. It was a very large bun, the biggest and stickiest Mr. Brown had been able to find, and in a matter of moments most of the inside found its way on to Paddington’s whiskers. People started to nudge each other and began staring in their direction. Mr. Brown wished he had chosen a plain, ordinary bun, but he wasn’t very experienced in the ways of bears. He stirred his tea and looked out of the window, pretending he had tea with a bear in Paddington station every day of his life.”

Last week, Michael Bond died at the age of 91. Just reading the headline brought those memories of my mom reading to me and me reading under the covers with a flashlight come rushing back. I remembered reading the books to Jimmy and Molly and realizing they thought listening to me giggle over the stories was funnier than the books themselves. Memories so powerful that it was as if no time had passed, and I was back in my childhood bedroom or in one of the kids’ bedrooms in Sacramento or Oregon.

Joy .. bliss .. momma love .. all wrapped up together. Beautiful memories that ease the pain of not having Jimmy or my mom here. Precious reminders of what matters in life and the enduring sweetness of those moments.