Death Of An Old Soul

From a distance
I can see something’s changed –
it’s half its former height,
its top a jagged spear –
and on the ground a massive
section of trunk, its arms octopus’d
as if it tried to catch itself
as it fell.

And once I cross country the meadow
the corpse becomes real –
its small branches washed away,
no doubt, by recent floodwaters.
I walk circles around what still stands,
wondering, look up at the lowest
branches that swoop in a graceful arc
as they did for a good century
or more like a dancer’s arms,
holding browned clumps of needles,
tight fists of brittle pine cones
still hanging on.

I climb onto the downed trunk
just at the spot where its grand
top divided, twin branches
on which only squirrels or birds
or bugs could alight when
it stood upright.

That’s another clue – busy bugs
once raced along this bumpy
highway, working their way
up and down the puzzle pieces
of variegated trunk, those same
pieces lying like broken china
shattered at its base. I pick
some up, put them in my pocket,
finally voicing the unknowable
why?

When we come across the body
too late, having missed
the lightning strike, the crack, the fall,
only silence meets us. Or did we
miss the telltale clues lying
dormant for decades? Did those
selfsame insects devour it
from the inside out? Did
blight consume it?

Now I sit – rump on one half,
feet on the other – where
the twin spires split into
a graceful V, each going
its own way, rising majestically
within the bowl of this granite
cathedral.

I began to mourn its passing,
thank its spirit for its service
in this meadow alive with birdsong,
ducks quacking overhead,
deer up to their backs
in tall grass nibbling
their evening meal –
and the channel of river
that rings this spot.

It was never mine to claim,
but my heart did anyway,
another tall living thing that
sheltered me, that collapsed,
as you did, that I came upon,
as I did you in your final pose,
leaving too many questions
that will never find answers. 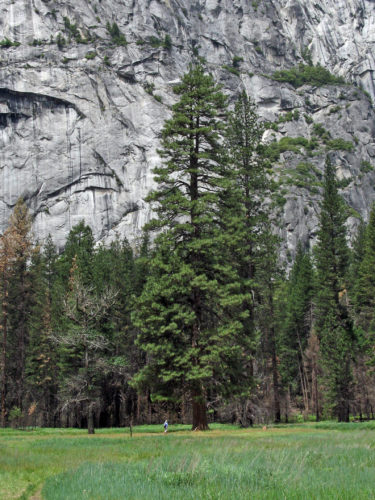