Getting Off The Train

That it will never come again is what makes life so sweet. Emily Dickinson

We thought we were going to lose Jimmy on a Friday night, as we watched the pauses between his breaths get longer, then longer still. I felt him drifting away, moving toward the figures only he could see in the upper righthand corner of the room. The special people he didn’t recognize but who “seemed nice.” The ones who had come to carry him home.

Molly, Dan and I stayed close, showering him with love, silently releasing him. And then he returned. Opened his eyes. Smiled knowingly as if to say, “Nope, not yet.” Asked for help getting out of bed so he could join us in the family room.

On Saturday afternoon, Jimmy asked to watch the NBA All Star game on my laptop, eager to see his favorite player, Damian Lillard of the Portland Trailblazers, in his first All Star game appearance. But double vision preventing him from seeing any of the action on the screen, and he gave up, discouraged, after a few minutes.

By late afternoon, the extended pauses crept back into his breathing. We called Alicia, his hospice nurse and Aja, his social worker to come be with him, to be with us. Along with our loyal pup Buster and Renee, one of our chosen family members, we surrounded the bed, eating sushi, playing Bob Marley and sharing funny stories and memories of our time together.

Around 8:00 pm, Jimmy began thrashing around in the bed, trying to throw off his covers, saying “I have to get off the train” over and over. Dan rolled him onto his left side, thinking that he was uncomfortable, in pain. Or that Jimmy wanted a better view of all of us gathered around him.

Jimmy shook his head. “No, I can’t get off this way.” Dan gently rolled him over to the right side, saying “Jimmy, I’ll get down first, then I’ll help you off.” And Jimmy was able to get off the train.

Those were his last words. We couldn’t get him to tell us why he could only exit the train on his right side, what he was doing on a train in the first place or why he wanted to get off. I’ve since read that the dying will often talk about waiting for trains, planes or boats. That they’re focused on where they’re going and how they’ll get there. Knowing that we couldn’t stop Jimmy from leaving, there was something shattering and beautiful about his father, the first person to greet Jimmy when he arrived in the world, safely cradled in the strong, gentle hands of the doctor who delivered him, being the one who enabled him to leave it.

Sometime after midnight, I crawled into bed next to Jimmy and put my head on his shoulder, matching my breathing to his as I watched his chest rise and fall. The horror and comfort of holding my firstborn child, knowing that he was still in there somewhere but out of reach, leaving me powerless to get to him, pull him back, beg him to stay. Knowing that soon I wouldn’t even have this, that once his spirit left his body, the cold, empty shell would be all that remained.

Those of us who loved him fiercely had done our best to fill him full of that sweet fuel during the prior weeks. Enough to carry him all the way home. We told him over and over how we proud we were of him, how honored we were to be his chosen family and dearest friends, how much of him we would stay with us always.

As I watched my son depart his battered, cancer-ridden body, I was struck by the realization that he would always be mine. That even though he would no longer be here in physical form, those 21 years of parenting him, protecting him, fighting for him, spending time with him, laughing and joking with him were mine forever. The memories of our days together would never make up for his absence but perhaps they were something to hang on to. Proof that he existed. Reminders of what mattered, who showed up, the difference Jimmy had made in his too short life. 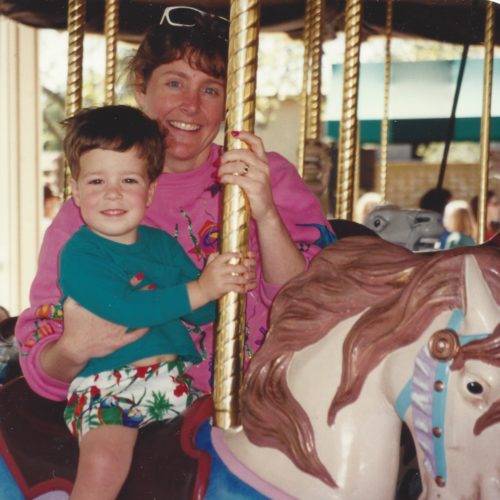 We are all a sunlit moment away from a long darkness, as poet David Whyte says. It’s taken me well over half a decade to find my way back to that feeling, those memories. For so long, remembering Jimmy as a relaxed, snuggly baby asleep in my arms; as an Energizer Bunny toddler unwilling to pause; as a shy grade schooler standing tongue-tied in front of the class felt like putting my hand on a hot stove. Intolerable for even an instant. Instead, all I could see were the milestones happening without him … his college graduation, Molly’s acceptance to Stanford, her first collegiate softball game. Somehow, it was less painful to try to catch glimpses of my shadow son than to stare at photos of the flesh and blood child I raised, for to do so meant accepting that all he did was all he ever would do.

Time and space, the healing grace of solitude and the fierce love of my people has allowed me to rise from rock bottom and stitch myself back together. To trust that I can sit in the waves of sadness and wait patiently for the seas to calm. To recognize that pain and joy can coexist. To understand that the beauty I now see comes from inhabiting my pain instead of turning away from it.

It will never be okay that Jimmy is no longer here. But I am learning to find my way back to my should-have-lived child. To sense him near me when Buster and I walk the horse trails by the house. To hear him say, “I told you he was a great draft pick” when Damien Lillard scores 50 points against the New Orleans Pelicans. To see him crinkling his bananaphobic nose at all the yellow fruit that gets consumed in this house every day. To pause with eyes closed and feel his arms wrap around me as he says, “I love you … so much.”

For now, I can wait quietly for the place on the other side, where time is eternal, and reunion is possible. Holy and beautiful and full of shimmering light. A place of discovering what lies beneath and beyond, when what is visible and solid no longer matters. A place where my mind can still, my eyes can close, and I can finally begin to see.