Invisible tears are the hardest to wipe away. Megan Slagter

Several years before my son was diagnosed with cancer, an eight-year-old girl in his class discovered a lump on her thigh that turned out to be a rare, aggressive form of bone cancer. We were new to the community, and I hadn’t yet met Jimmy’s classmate or her family. With only limited exposure to life-altering adversity, I didn’t understand the power of a handwritten note or homemade meal. So I signed the class card and sent the family a silent prayer for their daughter’s recovery and return to health, feeling quietly lucky that I’d never experienced anything similar. I couldn’t imagine the strange new world this family had been thrown into, nor did I want to. It felt like a foreign country whose language I didn’t speak, one that I had no intention of ever visiting.

Four years later, when an MRI revealed that a brain tumor had been causing my son’s increasingly intense headaches, I discovered just how well-populated the universe of children with a life-threatening illness is. We had been just one degree of separation from families who inhabited it, never realizing how paper thin the divide between us was. The universe had been there all along; I’d just been too blissfully unaware to notice.

Whereas I’d once stood outside the glass, abstractly admiring the ability of a parent to figure out how to juggle her child’s surgeries and daily radiation and still get her other children to soccer practice, I now understood that you do what you have to do. It’s not about being strong; it’s about making a concerted commitment to ensure your healthy children’s lives aren’t completely turned upside down. You find a way to make it all work by learning how little sleep you can function on, shutting out the scary possible outcomes  and focusing on doing the next hard thing.

Six months into treatment, Jimmy told a family friend that if someone offered to eliminate his brain tumor and the radiation and chemotherapy he’d endured, he wouldn’t take it because of how much the cancer had taught him and all the people he would never have otherwise met. Even when the cancer recurred two years after his initial diagnosis and the therapeutics got exponentially harsher, Jimmy never asked the most obvious question – “Why me?” Instead, he continued to make the best of the good days and soldier through the bad ones, ever hopeful he would one day be able to put the cancer behind him.

I, on the other hand, found myself asking “Why him?” or “Why us?” more often than I’d care to admit. I railed at the universe for ruining my perfect family, believing we had been unfairly targeted and grievously wronged. But by whom? And for what reason? There were no answers to these questions.

One afternoon, while out on a walk, I gave voice to my grievance and told Jimmy how unfair I thought it was that he had to go through this. He smiled sweetly, and said, “Oh, Mom. Why not me? Why not us? You and Dad have been able to drop everything to be there for me, to be there for Molly. We have money to pay the bills and afford the best care. Think of the kids we see during my hospital stays. The ones who spend their days alone because their parents have to work. Think of the kids whose parents don’t know how to do the medical research you do or who are too scared to question the doctors. Maybe it’s better that this happened to us.” 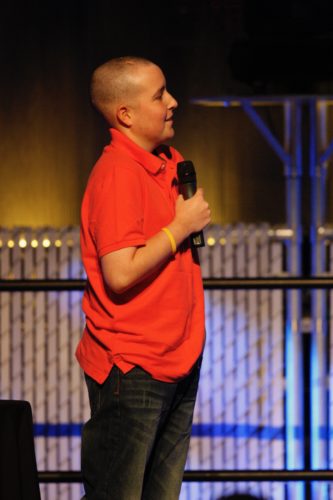 I’d love to be able to say that Jimmy’s wise-beyond-his-years perspective inspired me to stop being resentful or control my flashes of rage about what had happened to him. It didn’t. But what it did do is motivate me to pay more attention to what was happening all around me. In the oncology clinic. At both kids’ schools. To our friends. To notice the way everyone was suffering or struggling, often with something that most people around them knew nothing about. I became aware of all the ways that a life-altering event can upend everything. I began to understand what Jimmy instinctively already knew – that there was nothing special about us. We hadn’t been singled out or targeted. There was no reason this should have happened, but there was also no reason why it shouldn’t have either. Bad things happen all the time, and we cause ourselves more pain by trying to understand or explain them.

We are so often blind to what others are experiencing, focusing instead on how they appear on social media or on what they want us to see. Their shiny public lives instead of their private despair. Their successes and accomplishments, instead of what’s gone wrong or what keeps them up at night.

What Jimmy taught me on that sunny afternoon was that anger isn’t a shield and self-pity only makes everything worse. That to open my eyes to what other people are dealing with would help me feel less alone and allow me to see the brave, beautiful ways they found to go on. To ask “What now?” instead of “Why me?” To focus on what was left or still possible instead of dwelling on all that was lost.

I’ve spent most of my life seeing the world in stark terms – right or wrong, good or bad, you or me, us or them. Like an account with limited funds and available opportunities and not enough of either to go around. I thought the end goal was to be happy; to grab the proverbial gold ring; to spend my days striving for promotions and prestige; to achieve the kind of perfectionism that comes from hitting each stepping stone just right so you don’t stumble or fall.

I will never stop grieving my son’s death or wishing that he was still here. I would give anything to have him back, and I also know how much richer my life is for having known and loved him for 21 too-short years and for having had the opportunity to walk beside him on his cancer journey. Without it, I would have missed out on so much. The families we met, some of whom lost far more than we did (more than one child; a spouse, sibling or parent in addition to a child) and still found ways to carry on that I can only marvel at. The friends, both new and enduring, who leaned in and stayed close, forging bonds that are fire-honed and trauma-tested.

Jimmy’s cancer was like a sieve, sifting out those who couldn’t or chose not to stay. The ones who looked away or never showed up at all. But it was also an invitation to some of the most courageous people I have ever met. The ones who pulled up a chair and said, “I have no idea what to say or how to help. But I will sit here with you and make sure you are never alone. I will say your son’s name, and I will never, ever forget him.”

I couldn’t unsee this life. And in truth, I wouldn’t want to. It’s terrifying to discover just how fragile and easily shattered the world is, and yet it may be the only way to appreciate just how beautiful and full of wonder it is.