I Know The Real Truth

The very first thing I tell my new students on the first day of a workshop is that good writing is about telling the truth. We are a species that needs and wants to understand who we are. Sheep lice do not seem to share this longing, which is one reason why they write so little. Anne Lamott

I know the real truth about suspecting something is terribly wrong with one of your children. Knowing deep down that the arrogant pediatrician-on-call is misdiagnosing your son’s debilitating headaches and violent vomiting as teenage-onset migraines, even as he tries to shame you by saying, “This is why we shouldn’t let you mothers on the internet …”

I know the real truth about the internal battle that rages between your desire to argue with this smug, self-righteous doctor’s careless diagnosis and your growing fear about finding out what’s really happening to your son.

I know the real truth about the way time stops when your husband kneels beside your desk chair and says, “Jimmy has a mass in his brain.” That even as the words, “No. That’s not possible. It can’t be.” leave your lips, a part of you already knows the diagnosis is accurate and explains all the worrisome symptoms you’ve been seeing for weeks.

I know the real truth about the way everything else falls away but your precious family as you stand in between the life you had, where childhood cancer was rare and happened to other people’s children, and this terrifying new world where children can die, and nothing will ever be the same again.

I know the real truth about the moment when you and your husband leave your home office together to tell your children, who are curled up on the couch together watching Friends, that their life as they knew it is gone forever.

I know the real truth about trying to absorb the details of a treatment plan for your child’s malignant brain tumor. The terrifying list of everything that can go wrong with the surgery, the radiation, the chemotherapy. Cognitive defects, stroke, kidney failure, deafness, even death. When the pediatric neuro-oncologist assigned by the first children’s hospital says your son will be sterile once she’s done with him, this is the word that breaks you. He’s wanted to have children from the time he was little, and you never once considered the possibility that you would never get to know your grandchildren. 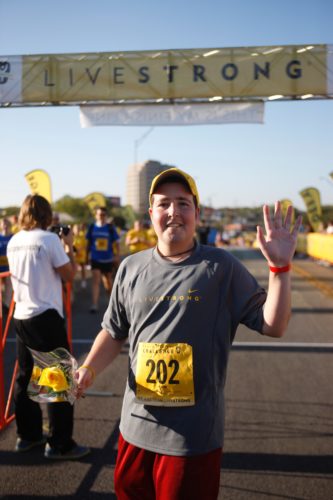 I know the real truth about how the energy leaves your body when you hear the words “There’s something on the scan,” a year after your son finishes his initial year-long treatment. The way the words shatter everyone’s certainty, including your own, that he was cured. You know before Dr. Nicholson enters the exam room, ashen-faced and shaken, that something is wrong. He never takes this long to deliver the news about a quarterly scan. When Dr. Marquez, your son’s radiation oncologist follows Dr. Nicholson into the room, her eyes red, her cheeks still wet with tears, you know you won’t be taking your daughter to the Jonas Brothers concert tonight as planned, her birthday celebration upended yet again by her brother’s cancer.

I know the real truth about listening to the results of your son’s latest MRI and realizing that he is going to die. Not tomorrow, not next week, not even next month but soon. That those small changes in his balance, the increasing numbness in his feet, the return of his double vision were signs of what you feared most – the cancer has spread everywhere in his brain and spine.

I know the real truth about the moment when you realize there are no more weapons, no more treatments left to try. That your beautiful boy will not be the one who lives with this cancer as a chronic disease. That he will not live period. And that it will fall to you to tell your husband and eventually your son the truth, for you can see from their faces that they haven’t yet grasped what the doctor is gently trying to convey.

I know the real truth about telling your oldest child that he is going to die. The stomach-churning anticipation of searching for the right moment. Despite how close you are, you realize that you are a coward when it comes to this. If not for his beloved nurse practitioner urging you to tell him the truth, you would chicken out, pretend that the catheter is temporary, that there’s still more time, more options, reason to hope. You want him to spend his remaining days and weeks surrounded by the people he loves most, doing what he wants to do, but you do not know if you can handle the pain of being the one to destroy his dreams. He has spent eight years looking to you for reassurance that you will find the path forward, uncover the next viable option, fend off his cancer, buy him more time. But the clock is running out.

I know the real truth about about watching your son realize what it means when you can’t find the words to tell him when he won’t need the catheter any more. The way your silence and the pain on your face make him pause and then slowly say, “It’s not coming out, is it?” How you take a deep breath and confirm his worst fears. And then grab hold of each other and sob.

I know the real truth about watching your son die. The way time slows down in a manner that is both brutal and beautiful. The joy of discovering that every single person on his list of who he most wants to see says, “I’ll come. Just tell me when.” The way they drop everything and get on a plane from across the country or halfway around the world. How sweet it is to listen to him laugh with them over some private joke, their heads almost touching. These friends and chosen family members love him fiercely, deeply, and they are unafraid of how he looks or how nauseous he feels. He tells you that he plans to tell each of his essential people how they’ve enriched his life and how much he loves them. His grace and courage make you cry and rage quietly about the unfairness and your inability to save him.

I know the real truth about sitting vigil with your firstborn as the life slowly leaves his body. Listening to Bob Marley, held up by friends who love him dearly, waiting for his inevitable final breath. When it finally comes, mixed in with the searing agony of his departure is the knowledge that despite every one of your mistakes as a parent, he leaves knowing that you have loved him with everything you have.