Three years ago, we had a really bad thing happen. We lost a father and a husband, and I didn’t think we’d ever get over it, but then this guy next to me came into the picture, and everyone could see I was happy again .. but I was still worried about my kids, Anna and Harry, and whether they would be able to accept a new man in their lives. Now I know how Anna feels, and what she feels is that no one could ever take the place of her dad, because he was a really great dad but .. for someone as special as Ryan, we could all just make a little room. Anna (as Tess) in Freaky Friday

When Jimmy died, I felt as though the universe should be kind to me. People shouldn’t cut me off in traffic, and the clerk in Target shouldn’t get irritated when I couldn’t find something. I wanted my friends and family to show up, too, even when I didn’t know what I needed from them.

But life isn’t like that. The people you don’t know — other drivers, store clerks — have no idea that you’ve just suffered a devastating loss. And the people you know are going to be who they are, not who you wish they would be.

I remember saying to my first boss out of college, in a voice full of youthful arrogance, “I like to look for the best in people.” Steve smiled sweetly, and said, “I like to see people for who they are.”

I am not very good at that even now. Too often, I believe what people say instead of watching what they do. So when Jimmy was diagnosed with brain cancer, while he was in treatment and after he died, I thought the people who cared about me would “do the right thing”. And most of the time, they did. But I was taken aback and hurt when some of them didn’t. I shouldn’t have been surprised. Those who didn’t show up, make a meal, call, visit or want to know how I was (instead of talking about themselves) were being who they had always been. It was just that I had never needed anything from them before. So I didn’t notice.

But sometimes what looks like selfishness or a lack of caring is fear or awkwardness. Being with another person who has a terminally ill child or has a child that has died is hard and scary. You can feel uncomfortable in the presence of such pain. You don’t what to say. You can’t think of anything to say. You want to make it better, and although you know intellectually that you can’t, you feel as though you should be able to.

What I’m learning from other people who are less judgmental than I am is that if you make room for people to show up for you and don’t criticize or try to dictate what that looks like, in many cases, they will. Sometimes, it won’t be in the way you wanted. Sometimes it won’t be enough (until you realize that your friend is giving you everything she has). Sometimes it will turn out to be exactly what you needed, and you just didn’t know.

In Salt Water, I wanted to create a space where those of us who’d lost a beloved could find comfort and understanding. But I also wanted to make room for the people who love us where they could understand something of what it’s like to lose someone you can’t live without and gain some insight in how they can help and support us. To feel that even if they couldn’t find the words initially, there was space to come back and say, “I didn’t know”, “I was scared”, “I thought I was going to make you uncomfortable”, “I didn’t have the words”. Because it’s never too late to reach out to someone who’s grieving because the pain and loss don’t go away, and there’s always room for someone who wants to sit and hold your hand. 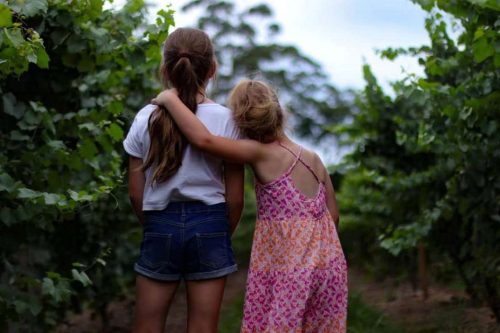