How lucky I am to have something that makes saying goodbye so hard. Winnie the Pooh

The house was unobtrusive, set back behind huge liquid amber trees. Towering trees that looked spectacular in the fall covered with scarlet red, orange and brilliant yellow leaves and then spent the next three months dropping those leaves and dry brown spiky balls that hurt my bare feet when I accidentally stepped on one.

My mother loved those trees — the shade they provided and the way they scattered those gorgeous fall leaves in her garden. My father hated them as it fell to him to sweep up the leaves and sharp balls and monitor the tree’s roots to be sure they weren’t cracking the sidewalk in front of our house in a way that required repair. 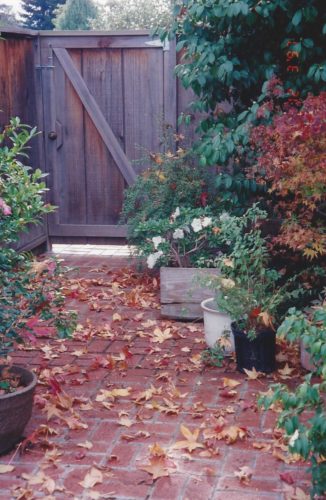 I don’t know what color the house was originally but I remember it best as a deep shade of green. My parents bought the 2000 square foot house on Hurst Avenue a year after they married for $29,000 in cash. Two years later, they had me.

Functionally, this childhood home of mine was a mess. Three bedroom, two of decent size, one quite small, none with a bath en suite. One full size bathroom between two of the bedrooms and a second half bath at the other end of the house. My parents consulted various architects over the years but none could figure out how to redesign my parents’ bedroom closet so that the existing bathroom could be entered from their room or how to add a second full size bathroom without a great deal of remodeling and expense. Despite the floor plan, the house was bright and cheerful and full of light. Plenty of space for the three of us and often full of family that I adored. 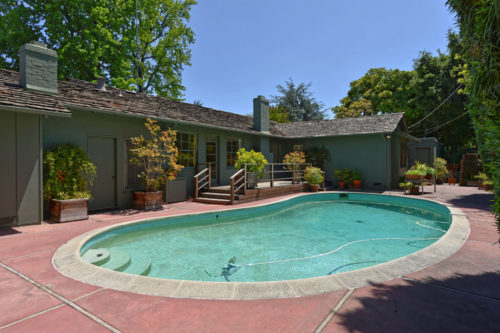 The backyard was both a source of delight and frustration for me growing up. I loved swimming in the pool and jumping off the diving board. It’s where I learned to love the San Francisco Giants as my dad would sit outside for hours, reading the paper, filing his nails and listening to the ball game on the radio. But the area around the pool was all concrete, and my parents used that as an excuse for why I couldn’t have a dog. My father didn’t like cats. So I had fish and the occasional jar of tadpoles.

My kids loved to visit Nana and Poppa and stay in that house. They slept side by side in the living room on inflatable mattresses. They ate breakfast at the sunny kitchen table, devouring bagels and slices of Hallah bread with “the works” (butter, cream cheese and Nana’s homemade strawberry jam). They swam in the pool, even though the heater was long gone and the water was freezing. They drew pictures and read books in the library and played endless games of iSpy. 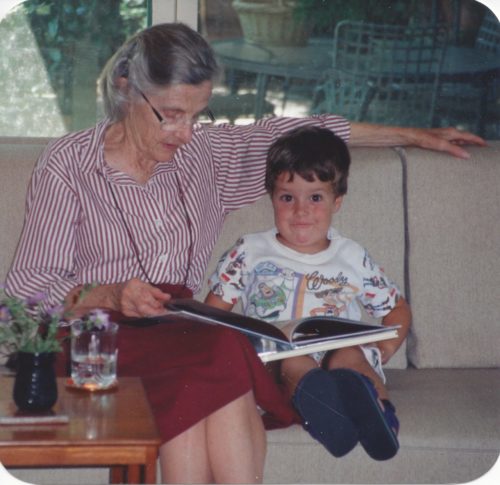 Our house sat on the corner of Hurst Avenue and Patio Drive, facing another corner house across Hurst. There was a house next to ours and a fourth house across the street kitty corner from ours. For the most part, my parents liked the neighbors who lived in the other three houses, although they were happy when Grace and Jim moved away. Grace had a massive Great Dane named Duke. Instead of letting Duke out in her backyard to go to the bathroom or taking him for a walk around the neighborhood, my parents would routinely look out the kitchen window to find Grace walking Duke across the street to our front yard, watching him poop and returning to her house, leaving the large, steaming pile for my parents to clean up. My father wanted to confront Grace but my mother, ever the diplomat, came up with the better plan — Mom told Grace that she’d sprinkled cayenne pepper everywhere to keep squirrels from digging in the yard and that she’d hate to see Duke get it on his paws or up his nose …

The neighbors that lived in the other three corner houses on Hurst during the final twenty years my parents owned our home were wonderful. Martha brought Mom persimmons from her tree and took her to the emergency room the day she saw Mom fall and break her wrist in the driveway. Kim checked on Mom regularly, taking her for walks to see the newest open house for sale, watching Mom’s house for her when she was out of town, bringing Mom the neighborhood news and gossip when she didn’t feel well enough to go outside. BJ and Mom would meet in their front yards to discuss BJ’s husband’s latest travels and Rumi, whose poetry they both loved. After Mom died, BJ told me that she had been staying at her sister’s whenever her husband was gone for long periods of time but that Mom, who lived by herself for 12 years after Dad died, had inspired her to stay home alone.

After Dad and Mom died, I sold the house to a developer who tore it down and erected a five bedroom, six bath, 4500 square foot house in its place. The new house is tan with fake white shutters and rock pillars. It’s nondescript and doesn’t match either the older, existing homes or the newer home next door. The builder also changed the orientation of the house so the front door opens on Patio Drive, which means Mom’s neighbors across the street now look out on an eight foot high fence and a two story blank wall with no windows.

At Mom’s celebration of life, I apologized to the neighbors for what the developer had done .. the ugly house, the ripping out of Mom’s beautiful garden, including the spectacular flowering crabapple tree my grandmother had given her 40 years ago. It wasn’t until recently that I realized what I found most upsetting was the change in the house’s orientation. By facing it toward Patio Drive, it was as if the house had turned away from Mom’s neighbors and ruined the little community those four families had spent years building. 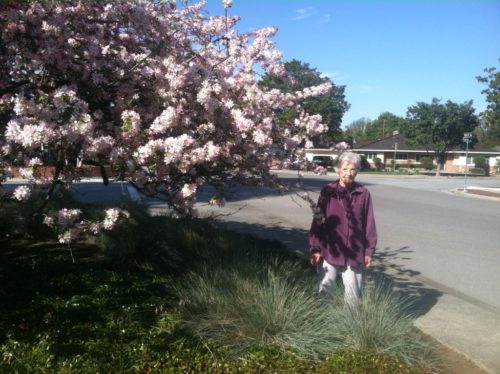 While I was growing up, our family went through more than its share of trauma — mental illness, irrevocably damaged relationships,financial messes, bitter divorces, terminal illnesses, but within the four walls of Hurst Avenue, the three of us formed our own little unit against the world. My parents believed in telling me the truth about how other family members were behaving — the choices they were making and the ways they were hurting themselves or others. With those truths came important lessons … that home is wherever the people you love most are and that you and those beloved family members can help each other weather whatever bitter, awful stuff life throws at you and together, find a way to survive it.