We sailed out
further than I ever imagined and
turned to look back, gauge the distance, watch
the changing sky. I tell her I do not think we are alone in this world though the
shore is all we know, the line of cottonwood trees, the sloping bank
quickly receding.

—from “Seaworthy” by Marie Reynolds

She was in every way seaworthy, up for the voyage. And though the night-boat carried her off early one August morning, Marie gave the world one exquisite collection of her poems before she went. She made it one of the great priorities of her last months to give the poems that became “Seaworthy” to me.

“If I …,” she said one day to me in May, looking at me as we sat in her living room, “I want you to …” and she handed me a small stack of typed poems. “I can’t assemble it into a manuscript. Can you find someone to type it?” she asked.

This indicated a major shift in my dear friend. She was getting thinner every time I saw her, the metastases eating away at her. She’d stopped treatments, this former nurse, because they weren’t working. It was the third time cancer had overtaken her.

“Yes,” I assured her, not saying what I was thinking, that I wasn’t letting her stunning words out of my hands, that I would type up the poems into a manuscript. We had already agreed that I would publish it. Neither did I say that I hoped she would live long enough for me to put her printed book in her hands.

As it happened, she did. Three of her poet friends (Susan Kelly-DeWitt, Susan Flynn and Dennis Hock) wrote blurbs for the cover in a few days. Susan Kelly-DeWitt contributed a beautiful painting for the cover. A magnificent designer, my co-publisher and our superb copy editor at River Rock Books flew into action to design and assemble the book and get it to a printer in a week. Not knowing how much time Marie had left, I had a proof copy made so she could hold it, perhaps read it. In 13 days, I delivered 100 copies of “Seaworthy”, her first and only poetry collection into her hands as she laid on the sofa in her living room. She smiled, held it to her chest, ran her hands over the soft cover. She let me take a photo of her, so depleted, so happy.

I leaned over, kissed her on the cheek that day in late July, whispered, “I love you,” and she whispered, “Thank you. I love you, too.” I knew this was goodbye.

Bob Stanley, the president of the Sacramento Poetry Center, wanted to do a reading of Marie’s book. Though she couldn’t attend, 27 people who loved Marie came to read poems from “Seaworthy”. Bob shot video of each reader and got it to Marie’s daughter, Meredith, who showed her mom all those readers, saying how grateful they were to Marie — as poet, writing group leader, inspiration to so many.

Then I went on vacation in Canada, expecting to hear while I was gone that Marie had died. But she wasn’t ready to go, despite not eating for weeks. When she finally let go, she’d been without food for more than six weeks. She was 67 years old.

We met as part of the Sutterwriters writing groups hosted by Lawrence (Chip) Spann at Sutter hospitals in the early 2000s. Marie was still working as a nurse at Sutter Memorial, but she’d been an English major at Sac State before she became a nurse. She and her husband, Steven Black, were both English majors. They both became nurses. He worked in the ER at Sutter General until he became ill with ALS and died in November 2008.

As Marie cared for Steven at home, she invited a number of us former Sutterwriters to join her in their living room once a month on a Sunday evening. We’d each bring a poem, read it aloud, hear someone else read it aloud as Marie kept time on her iPad. Ten or fifteen minutes to talk over the poem, say what people thought was working well and to offer gentle suggestions, often in the form of questions.

How many times did I hear her say about my flabby drafts, “I wonder if you need these two lines,” or “What would happen if you moved this section?” Sometimes she’d just smile and say quietly, “It’s working.” She was always gentle, always spot on with her suggestions for me. Her own poems, even in early form, emerged as polished gems, and we sat awestruck by the precision of her language, the elegant construction of her poems. Some of them now appear in “Seaworthy”.

We continued to meet after Steven died, the last time late in 2017. What I would give to sit in that living room one more time with Marie, to hear the iPad’s gentle chime that was the signal to begin reading and end discussion of that piece.

Just a few days ago in the writing groups I host, thinking about Marie’s long goodbye, I wrote a draft of a new poem, which ends (for now) with these two stanzas:

I want to find the wings you helped
me grow, fly to you and whisper,
You’re OK. You’re OK, my dear,
cleared for takeoff, ready to leave

this clump of cells and bones behind,
you who are becoming a poem
without words, stretching beyond breath
and body, resting here in my heart. 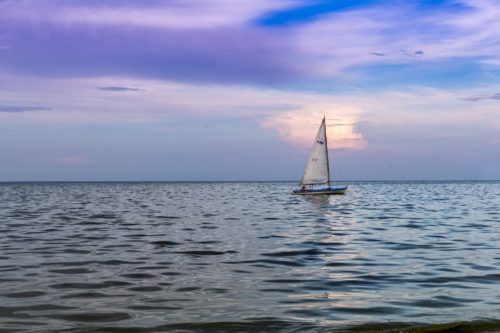 I know she’d have something to offer me about this, thought I don’t know what. For now, as so many who loved Marie bid her farewell — including her daughter, as well as her new love, and many friends and family members — I will hold onto her words, the last part of the last poem in “Seaworthy,” which I read before a full house at the poetry center 27 days before she died:

What does it take to trust? We are at sea,
you and I, and the soul that rises,
rises like an island between us. Wary
dreamers. At night, we sleep. Moths watch
from the screens. Oars slide without sound
into the water and all through the hours,
the night-boat glides us toward morning.

Click here to order Marie’s book (note: although it says the book is backordered, Jan will receive the order and mail the book to you.)