… we who have had our travel plans disrupted and rerouted via the valley, we recognise each other.
even from far off.
even in our silence, we can tell who colours beyond the rules
and the walls, and all over the straight lines that keep us from seeing the light inside each other.
Liezel Graham

Sometimes in life, there are no second chances.
The moment passes. The damage is done. Your loved one departs,
walks away or dies unexpectedly before you could say goodbye.
You thought you had more time. To say the thing, mend the hurt, offer or accept the apology.
And now the opportunity is gone for good.

Sometimes the worst pain isn’t the death or saying goodbye, it’s the regrets.
Like a song on a loop tape, you list the litany of your failings over and over again.

We are so often prone to perfection.
What allows us to make peace with our flawed human selves is the possibility
of doing better, being better, getting it right.
The window still open, the moment not yet lost.

But second chances don’t erase the first one.
We can only learn and grow and change.
Take what we know and show up, speak up, stay.

Life offers us more chances all the time,
but we are often too preoccupied to hear the knock
or too busy to get up and open the door.
What shatters our competency coma is the wake-up call,
the almost loss, the near miss, the what could have been.

When my son’s tumor took control,
there was no time to make amends for my past sins.
The flashes of temper, the impatient words, the distracted half-listening.
There was only this moment, that decision, the next right thing.
Action and reaction. Sick and well, Brave and baffled. Hopeful and terrified.

After the intensity eased, and we were lulled into thinking all was well,
I learned that Jimmy didn’t remember most of what I was carrying.
His gentle dismissal allowed me to stop dragging my guilt around.
To see my mistakes and regrets as the small pebbles they were,
instead of the boulders I had built them into.
Present and painful in the moment, then past and forgiven.

The tumor’s reappearance offered a different kind of second chance.
An invitation to stay present, discern what mattered, say ‘yes,’ prioritize the now.
To embrace the time we had, instead of waiting for the time we thought was a given.
To grab hold of hope and plant it outside our front door.
To eat pancakes for dinner, turn the music up, seek the laughter instead of the tears.
To make chocolate chip cookies for no reason and pretend not to see Jimmy
when he snuck bites of the dough from the bowl.
To fight for health and life and to believe, even when we were the only ones who did.
To be gracious when we were right, knowing that even the very best doctors
are wrong sometimes.
To craft our own family and reject the demands of those who thought blood
was a weapon of entitlement.

We are the lucky ones, who saw the caution light go on
and made the most of the six years we got,
even as we cursed the loss of the lifetime we thought we were promised.

It is a gift to be told there is no time to waste.
That your life is where you are now, worth embracing and celebrating,
despite its detours, unexpected turns and harsh realities.
That these moments, precious and dear, may be all there are.
That the time is now … to throw open your arms, love your people fiercely, find the light.
To see the joy that is always there, as long as you are willing to look for it. 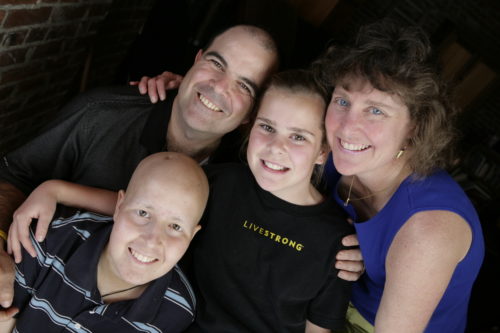