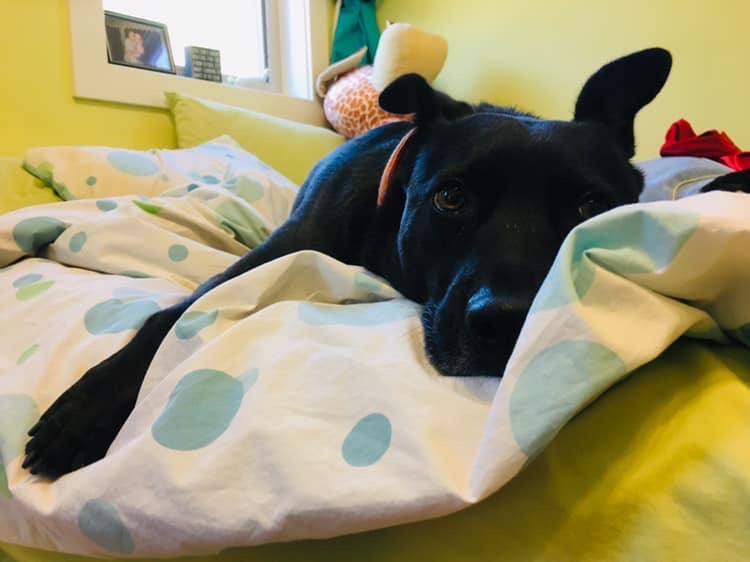 …the darkness shall be the light, and the stillness the dancing. T.S. Eliot

Buster’s growl penetrated my sleep, driving me out of my dreams. Deep and guttural, it was a sound I’d never heard him make before. The noise was primal, like the wild animal he was descended from.

Raising my head from the pillow, I could barely make out his small dark frame across the room, his bright white chin hair glowing in the moonlight. I fumbled for my glasses, got out of bed and carefully maneuvered my way over to him.

Ears erect, body stiff, tail frozen in a straight line, Buster stood motionless at the glass balcony door in my bedroom, staring intently into the dark yard. Below us, the oak trees and granite boulders formed angular unfriendly shapes and shadows in the dim light of the waxing crescent moon. As I struggled to see what he was seeing, Buster remained at attention next to me. Only his lips and jaw moved as he maintained his low growl. With Dan out of town and Molly away at college, I was on edge, jumpy, quick to react to any odd noise. Part of me was afraid to find out was lurking out there, but I rationalized it was better to know then not. Tucking myself behind the door frame, I flicked on the outside light. Caught in the beam was a 50 pound male bobcat crossing the grass. Buster went silent as the two beasts started at each other. Then the cat padded silently out of the circle of light into the impenetrable part of the yard. Buster returned to his tan memory foam bed and fell asleep immediately. I was slow to follow as I lay there thinking about what else might be lurking just beyond what I could see and whether it, unlike the bobcat, could find its way into the house.

Eighteen months after Jimmy passed away, Dan took a job working for a company headquartered in Portland, leaving Buster and me alone in the house five days a week. During the day, I loved the solitude. The freedom to make a mess and leave it for days. The opportunity to cocoon and avoid the demands of the outside world. Still shellshocked from the death of my son, I was reeling from the loss of my mother who had died a year after. Dan and I cleared out her house, selling and donating what we could on the fly, then moving a U-Haul’s worth of boxes into our garage. I told friends that I needed the time to sift through a lifetime of books, letters, photos, artwork and other belongings, weighing what to keep and what to release. But the truth is, I wanted to be by myself, as long as I could stay busy enough to avoid being alone with my thoughts. Administering Mom’s trust and sifting down the physical proof that she and Dad existed took all of my concentration and energy, leaving no space for the grief dancing just beyond the fence line. 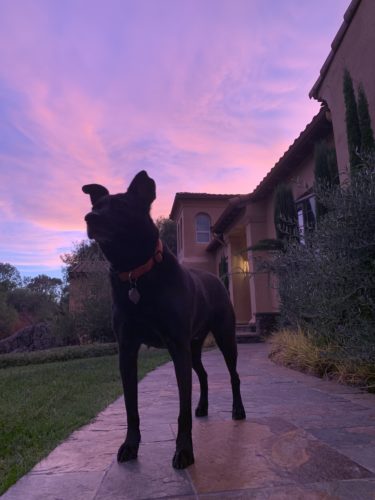 But night time was different. Dan has traveled for work for most of our married life, and I am used to being on my own with the kids during the week. But with Jimmy dead and Molly away at school, the darkness felt dense and menacing. Buster is loyal and loving but perpetually nervous. We think he was abused before we rescued him at the age of four months as he cowers around strange men and shakes uncontrollably when he has to get into the car making him an unreliable threat barometer. But with only the two of us at home, I found myself watching him closely, jumping every time he bolted off his bed to bark at an unseen intruder in the yard. It wasn’t until the bobcat appeared that I realized just how much he knew about what was happening in the pitch black world just outside the house.

I will never know how Buster hears the unseen, but I think it begins with his willingness to sit motionless and peer into the darkness. To listen intently, patiently, until he can decipher what he’s hearing, the need to know greater than the fear of what he might uncover.

I wonder if it’s the shift in the normal night noises that stirs him to stillness. The lack of sound as the frogs go silent in the dry creek bed or the barn owl pauses its call. The unexpected quiet seems to attract Buster’s attention the same way the pause after my first sob does, the lull signaling him to turn his head toward me before getting up to lay his soft head gently on my lap.

It’s taken a long time to find my way to stillness. To sit with the darkness, the rage, the shame, the regret. To check in with my body and trust that I can handle whatever truth emerges from there. To realize that facing what is outside isn’t nearly as scary as examining what’s inside. As daunting as it is, I don’t believe healing happens until you sit in solitude with your loss. Done too early in the grieving process, the heartache and longing will bowl you over or bury you. Done too often, and the pain will be more than you can hold. You have to wait until the sadness settles into your bones. Until the weight of your grief shifts into balance, becomes carriable. The secret is finding moments of silence and breathing into them. Pausing with your eyes and heart wide open. Trusting that in the quiet, you’ll start to understand how to put the pieces of your life back together. To find your way to the beloved who’s no longer here, your breath building a bridge between you. A connection profoundly changed in shape and form but there nonetheless.

When Jimmy and Mom died, I struggled to navigate the quiet of an ordinary day. Long walks helped. So did the time at home to drift in and out of my grief. To push it off or ignore it when I needed to, with no need to manage anyone else’s sadness or reaction to mine. To keep my hands and body busy with the boxes in the garage with no deadline to meet. To discover how much there is to learn from silence. The way my breathing has to calm to hold me motionless, allow me to settle into my body to pause and watch the grief surge within me. To learn that no matter how badly I ached, the pain would eventually move through me like water running downhill. To stare into the darkness and still see the light. To acknowledge all my losses and keep searching for what remained. To face the feral part of my grief, trusting that survival and a peaceful night’s sleep lay just on the other side.