No one feels another’s grief, no one understands another’s joy. Franz Schubert

As a first-time mom, I could hardly wait for Jimmy to walk. It was only after he got mobile that I fully understood all the ways my life would change. Jimmy in perpetual motion in a split-level house with tile floors ringing the family room and a two-foot-high brick bench in front of the fireplace meant I spent his waking hours trailing after him, trying to catch him before he pitched forward and hit his head. 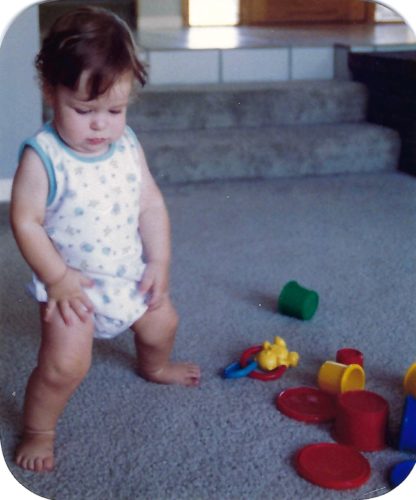 The better his coordination got, the faster he got, the more he got into. By the time we started parent-toddler class in the fall just before his second birthday, I felt as though I was spending most of our time together telling him what not to do.

Although I joined the class to give Jimmy some new playmates, what I loved best was the 40 minutes of parent education. A few months in, the teacher gave a talk about using directive language with children, explaining that when parents say “Don’t run!” or “Don’t yell!” what the child hears is “Run!” or “Yell!” without the “don’t” in front of it. Even if they comply with the instruction, you’ve still left them with lots of other unacceptable options – skipping or hopping and shrieking or other ear-piercing noises. Instead, it’s far more effective to tell a child what you want them to do instead of focusing on what they shouldn’t do.

This helpful wisdom came back to me a few years after Jimmy died as I was preparing to give a talk on grief and loss to a group of Rotarians. I was splitting the time with a dear friend so I only had 15 minutes to talk about how to support a friend or family member who’s grieving a significant loss.

Was I missing anything important, I wondered? I put “what to say to someone who’s grieving” into Google and hit ‘return.’ There were more than 35 million hits, virtually all of them, at least on the first 10-15 pages, in list form. “7 Things You Should Never Say to Someone Who’s Grieving.” “The 19 Worst Things to Say to Someone Who Has Lost a Child.”

Every list was slightly differently, yet they all peppered their advice with the word “should” and implied that the author had developed the definitive list.

It wasn’t until I stumbled over “64 of the Best Things Ever Said to a Griever” and “64 of the Worst Things Ever Said to a Griever” that I began to comprehend the problem. Although many of the statements on the “worst” list were objectively awful (“You’ve lost so many people; it probably doesn’t even phase you any more …”), others appeared on both lists. Some of what appeared on the worst list didn’t bother me while a few of the phrases on the best list made my skin crawl, especially the ones that felt as though they’d been lifted right off a Hallmark card (“Learn to live in acceptance of the loss, not in spite of the loss”).

It’s no wonder we are flummoxed by death.

When I tried to recall what people I love said to me after Jimmy died, I realized I couldn’t remember their words. What I remembered was they had said something.

I am so often silenced in the face of someone else’s shattering loss, left grasping for words. I understand the appeal of pre-packaged phrases, stamped with the Good Housekeeping grievers seal of approval. But these lists miss the point. Especially with someone we know intimately, it’s easy to get caught up in trying to make the person feel better, or worse, trying to fix what’s happened. What’s needed aren’t perfectly crafted sentences but acknowledgement. Saying you see how devastating the loss is. The unfairness. How sorry you are that this has happened. That you stand ready to help in whatever way is most needed – dropping off a homemade lasagna on Tuesday, picking up toilet paper and fresh fruit at the grocery store, bringing over hot coffee and a box of scones with no expectation that you’ll be invited in (or that your friend will even answer the door).

You have my permission to be confused. To stumble over your words. To make mistakes as you learn what helps and what hurts. Despite all the articles admonishing you about what you must say and should never do, what I hear most often from other grieving souls is about absence. The quiet phone, the empty mailbox, the turned head. The way silence wounds and burns, as if their loved one didn’t matter and their pain doesn’t exist.

So be brave. Face the beautiful awful moment, awkward and tongue-tied. Tell your broken friend or family member that you may get everything wrong, but what they should know is that you will be there, no matter what comes, wrapping them in love, refusing to look away.