The Far Side Of Unbearable Loss

But I can try, as I’ve been trained to, to attach myself to a hope, always too fragile to speak aloud, that we all might one day eventually be – in some tattered, transfigured way – OK. Chris Adrian, How To Hope: Lessons From A Children’s Hospital

for Shannon who holds space for me still

When Jimmy underwent high dose chemotherapy followed by a stem cell transplant, I held my breath for 21 days. You might think the scariest part of the protocol is the “high dose chemo,” but it’s not. Yes, it’s terrifying to watch your child get pumped full of lethal drugs that could cause significant side effects, even death, but the impact isn’t immediate. The “stem cell transplant” is, as Chris Adrian says, anticlimatic. Withdrawn from Jimmy’s own bone marrow earlier in the process, the stem cells are infused back into him in less than an hour. Well tended by a smart, savvy nurse, Jimmy suffered no ill effects from the transfusion.

The breath holding began as Dan and I watched the side effects develop with a vengeance and waited for Jimmy’s blood counts to recover from the chemotherapy, aided by his stem cells. This immediate aftermath is “always fraught with peril and sometimes rife with complications” (Adrian). The misery of those days was so great that we learned to savor any time when the misery eased. I would sit silently by Jimmy’s bedside  while he slept, knowing that those precious moments offered both healing and pain relief. And that minute by minute, we were inching toward day 21 when his counts would go high enough for him to be discharged from the hospital. 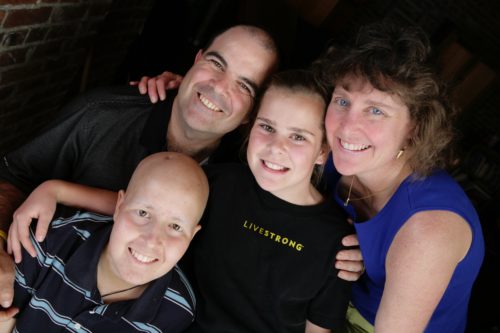 Jimmy approached his post-transplant recovery with a level of determination that was remarkable, even for him. When he first got home, he couldn’t walk from his room to the stairs without sitting in a chair in front of Molly’s room put there just for that purpose. One trip downstairs was all he could manage, and that descent required multiple stops to rest. Jimmy could barely keep even the blandest food down, having been on a liquid diet in the hospital and losing almost ten pounds in a month. Yet, despite his misery, the fire was back in his eyes. Every day, he would walk a little farther, rest a little less, do a little more. Eating was a bigger battle but even after a day when nothing would stay down, he would get up the next morning determined to try again.

After we were home for a week, we started going for walks outside. The first day, Jimmy couldn’t make it to the end of our street and back. Seven days later, he walked a neighborhood loop of .8 mile. It took us exactly an hour. Another week later, he did the walk in 20 minutes. The following Monday, he walked to the top of the hill behind our house and back down. It’s about a 2.25 mile walk, the first mile of which is an 11-12 % grade up hill.

During a clinic visit two weeks after his release from the hospital, Jimmy told the nurse practitioner that he wanted a Pepper Bacon Tillamook Cheesburger from Burgerville. Kathy suggested he try to keep some protein and fat down first as at that point Jimmy was living on saltine crackers, brown rice and broccoli. That afternoon, Jimmy ate two hardboiled eggs and some bacon for lunch. Ten days later, he ate his cheeseburger.

Small victories. Incremental yet meaningful advances. Heightened awareness of who and what matter most. Fear. Isolation. Hope. Joy. So much of what I’ve learned about enduring this pandemic comes from those days in the hospital and the two month quarantine at home that followed. Living in the moment as much as possible. Noticing the beauty of every day life. Finding daily delights – a sunny afternoon, the sweetness of an orange, the crisp fruity flavor of a cold glass of wine at the end of the day, the smell of Molly’s soft hair, the sound of Dan’s laughter, the wetness of Buster’s kisses, the gift of being together. Transfigured and tattered but somehow still okay. Joy is still here on the far side of life shattering loss. It’s bittersweet and precious, a reminder of all that we’ve lost and all that still remains.