Maybe there aren’t any such things as good friends or bad friends — maybe there are just friends, people who stand by you when you’re hurt and who help you feel not so lonely. Maybe they’re always worth being scared for, and hoping for, and living for. Maybe worth dying for too, if that’s what has to be. No good friends. No bad friends. Only people you want, need to be with; people who build their houses in your heart. Stephen King

One of the highest compliments my husband ever paid me is when he told me that my friends are very different from each other. My friends come from all areas of my life — high school, college, graduate school, the places I’ve worked, the neighborhoods I’ve lived in, the groups that I’ve joined, the nonprofits I’ve volunteered for.

I met Beth at a Barbara Sher workshop on creating a life you love. We bonded over our love of colored pens and have been dear friends for more than 25 years. Anne and I worked together in our older sons’ first grade class and became close while volunteering at our younger children’s co-op preschool. Billie and I met in Toastmasters. She quickly became a confidant and trusted friend. One of my favorite memories is of Billie holding four week old Molly while I gave a speech.

The downside of a friend network like this is that when your child is diagnosed with cancer, there is no group to lean in. I don’t belong to a temple, I wasn’t heavily involved in the PTA, I didn’t serve on the neighborhood association board. But that didn’t mean we weren’t well supported. My friend Kristen organized meals, and my other friends found all sorts of ways to help from taking care of Molly to delivering food baskets to the hospital to helping us navigate the bewildering new medical world we found ourselves in.

Like anyone else who’s been through something hard and painful, I got to find out who showed up and who didn’t. Who went the extra mile no matter the hour or need. Who stepped in to help without asking. Who knew how, when and what to offer and who sat back and waited for further instruction.

When friends I expected to be there weren’t, I got my feelings hurt. I noticed who didn’t make meals and who didn’t check in. I resented the friend who refused to come to me after Jimmy died, insisting instead that I drive 45 minutes to her. I was hurt and offended when a close friend responded to an email update about Jimmy’s cancer spreading all the way down his spine by asking for advice on the surprise party she was planning, a party to which I was not invited.

It took me far too long to realize how much pain I was causing myself by doing this. And even longer to start focusing instead on all the amazing souls who showed up. People who would get in a car or on a plane at a moment’s notice. The shining souls who came from all corners of the country to be at Jimmy’s celebration of life. The friends, both old and new, who say Jimmy’s name, share stories about him and never, ever forget him. The ones who built their houses in my heart, moved in and stayed there.

James Lane Allen once said, “Adversity doesn’t build character. It reveals it.” The same is true for loss. It’s not convenient to drop everything, head to one of the best delis in downtown Portland, drive to the children’s hospital on the other side of the river and track down two shell-shocked, terrified parents sitting in a florescent-lit basement in the bowls of the building because you know they’re not eating as they wait for their son to come out of an emergency craniotomy. It’s not easy to muster the energy to show up at a friend’s house to walk her dog and clean her counters when you’re in the middle of your own cancer battle. It takes courage to grab hold of the mother of one of your favorite high school students and help keep her upright while you’re grieving the death of your beloved 40 year old husband who died a few months after Jimmy did. Jimmy’s death forced me to see who truly cared and who really mattered. I looked away once, but I won’t make that mistake again. 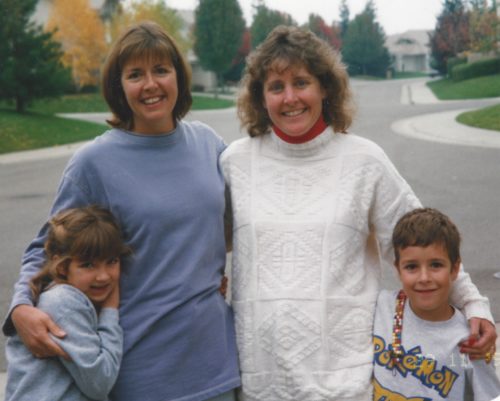