Standing in front of the open refrigerator, Dan turned, a glass jar in his hand, and said, “Honey, I think it’s time to throw this out.” The dark red contents filling the bottom were crusty and crystalized. But I made Dan return the jar to the shelf where he’d found it.

I don’t like to cook. I came by this dislike honestly as my mother didn’t relish cooking, although she liked feeding people. She rarely baked, and when she did, her attempts were often unsuccessful. During her Diet For A Small Planet phase, she made banana bread, omitting most of the sugar to make the recipe even more healthy. The result was inedible. Even my father who was grateful to be cooked for, sweetly told her that he couldn’t eat it. But after Mom discovered Hagen Daz ice cream, she returned to white sugar and began making jam.

At peak height, Mom stood 5’2″ tall, weighing just over 100 pounds. Despite her diminutive stature, she loved to eat. Peanut butter was her favorite food with butter coming in a close second. She taught Molly and Jimmy to eat their bagels and Hallah bread with “the works” — butter, cream cheese and homemade jam. Strawberry for the kids, blackberry for Dan and orange marmalade with ginger for me and Dad.

After we moved to Portland and Dad could no longer travel, every few months boxes from San Jose would arrive with little jars of jam, each carefully labeled for the recipient.

When I packed up Mom’s house after she died, I brought home eight jars of jam, a few labeled, most not. I am down to my last jar now. As was my mom’s style, the jar is repurposed, small in size (“Everything in moderation” was one of the mantras she raised me on) and bears a tiny round label with Dan’s name neatly written. Dan is right — it’s probably time to throw the jar out — but I can’t bear to let it go. 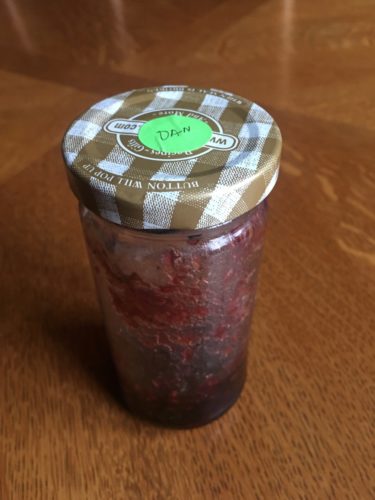 I know how to make Mom’s strawberry and blackberry jam, and I have her recipe for orange marmalade with ginger which includes such lines as “Put in pot, add water, say a cup, and cook …” (she never did like the exactness of cookbook recipes). But is the jam the same if I make it? I’ve never tried, and I cannot call her with my questions about the recipe.

I am still learning to live without Mom. There are so many moments when I think, “Mom would love this article, this book, that podcast.” Or “Mom would know how to phrase that, address that, resolve that.” Only to remember, as the daughter in Anna Quindlen’s One True Thing does, that the woman I want to call has been dead for more than five years.

What haunts me are not the words I didn’t say. Mom knew how much I loved her, how grateful I am to be her daughter, how amazing I thought she was. What I want to share are silly little tidbits and what I’ve learned since she died. That she was right about the mini colored peppers being sweeter than the regular size ones. That Honey Crisp apples are better than the Macintosh apples I grew up on. That being all “sweetness and light” to someone who’s treating you rudely often is the better choice. That forgiving someone who hasn’t apologized isn’t about condoning the act but about freeing yourself from the pain.

So the jar remains on the shelf, a tangible reminder of the bright sunny kitchen of my childhood, the smell of simmering fruit, the sound of Mom sticking a spoon in the pot to check the sweetness, the way she poured her love into everything she made.