We are defined by whom we have lost. Anna Quindlen

Barbara left last Wednesday, determined to depart, just like my father. Her daughter Judith, my cousin but really my sister in all ways save for her location on the family tree, said Barbara still knew who I was in June. One of a handful of names still on her lips after dementia ravaged the lion’s share of her address book.

Barbara is my father’s niece, twenty years his junior, the same age as my mother. She and her husband Seymour were my parents’ best friends and my second parents. Raised by the four of them, they each imparted wisdom in their own unique way. Seeing me, believing in me, they formed a stalwart wall of protection against the slings and arrows the world sent my way.

Seymour went first, declining rapidly over a period of months and dying before the doctors could figure out what was killing him. My father, who used anger and irritation as shields to avoid revealing softer emotions, cried when Seymour died, saying, “It should have been me.” Dad was 101 years old at the time, Seymour just 82.

Dad exited the following year, the easiest death to navigate of the four. Although I was only 42 years old at the time, Dad was so tired, so discouraged by the stabbing back pain that only morphine could tame and the macular degeneration that stole his ability to read that I couldn’t muster a protest. Given his remarkably good health and continued enjoyment of life until just a few months prior, I could hardly complain to the universe that I hadn’t been given every moment possible with him.

Mom was still alive when Barbara’s memory began to falter. She started asking the same question over and over, struggling to hold on to the answer or muddling the information we gave her until it no longer made sense when she shared it with Judith. Still eager to hear from us, her desire for long phone calls faded, and she often tried to end the conversation soon after it started. Initially hurt, then confused, Mom and I could sense the shift in her but wrote it off to loneliness, too much time rattling around her house without Seymour and only the tv to keep her company.

Barbara moved into assisted living six months after Mom died. When I visited, she ask how Mom and Jimmy were, no longer able to remember that they were both gone. She struggled to settle, asking for Seymour, sometimes able to remember with prompting that he was dead, sometimes wondering why he wasn’t yet back from the store.

As Barbara let go of more and more pieces of our shared history and the tapestry of family stories she had curated for so long, I tried to hang on to them for her. Asking about past events, gatherings, even family tragedies to see if I could pour the details back into her or extract any fragments that remained. Eventually, I learned to sit in her gentle, bemused presence and quietly look for whispers of the woman who had helped raise me. Over time, Barbara began sleeping more and more, disengaged from and bored by a world she no longer understood, content to wake up and find me near. 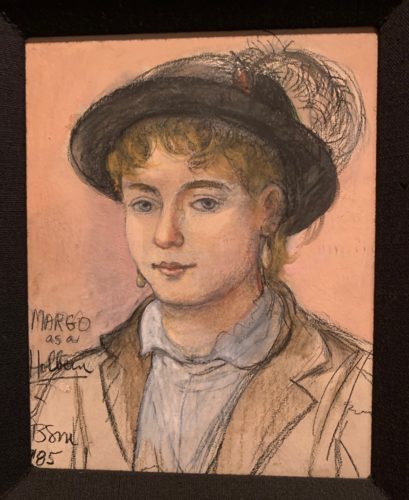 COVID stole the days when she would have recognized me still, yet saved me from seeing her once she no longer remembered who I am or what I mean to her. But in reality, the Barbara I knew left a long time ago. Bits and pieces remained but not enough to reassemble into who she once was. A talented artist. A lover of old movies. A crafter of long handwritten letters. A Filofox keeper of family quotes and stories.  An adoring grandmother and great grandmother.

There is no word for someone who grieves for a beloved whose mind is gone but whose body remains, only a name for the kind of anticipatory sadness we feel. Yet because I began mourning Barbara’s loss long before she died, my grief is woven with relief that she no longer has to be subjected to the indignities of her brain disease.

For all but her final weeks, Barbara was remarkably health with the vital signs of a 20-year-old a nurse told Judith during one of their many trips to the emergency room. But like my father, her life no longer held enough joy to bind her here.

Wherever she is now, I imagine Seymour and my parents are there, too. The Stony Hill wine is flowing along with the laughter and the conversation. They are solving the world’s problems, debating everything, united in the ways that matter.

Barbara was the last brick in the wall of love the four of them built, yet her fierce love for me remains, braided together with mine for her. She has already returned to take her place near me, the final gift of a disease that stole so much. There is no need to argue with someone with dementia and no memory of the times in the past when you did. The absence of that baggage makes space for the sweet memories to drift back. Our long talks. Her gentle reassurance. How much she loved my children. The way she would meet me at every age on the path to her house, arms wide, my name like a prayer on her lips, waiting to welcome me home.