Ash is the ultimate reduction, the bare soul, the last truth, all else dissolved. James Hillman

Jimmy was a calm, flexible traveler from the time he was little. He enjoyed going places, meeting people, having experiences that were new to him. He loved the ocean most of all, although as a toddler, he was rarely content to remain in one spot, digging in the sand or playing in the shallow waves. Instead, he wandered. That meant Dan or I had to take turns following him as he meandered down the beach, veering from side to side like a newborn calf.

One of Jimmy’s best qualities was his ability to sleep any time, anywhere. When he was two years old, Dan and I took him to our favorite sushi restaurant on Maui, the now closed Hakone restaurant at the Maui Prince Hotel. The line was long, and by the time we were seated, it was well past Jimmy’s bedtime. Instead of fussing or demanding attention, he lay down across two dining room chairs and promptly went to sleep, barely stirring when Dan carried him to the car ninety minutes later.

After Molly was born, we continued our tradition of taking one big trip a year, usually to somewhere in Mexico – Cabo San Lucas, Akumal, Tulum – or one of the Hawaiian Islands. Both kids loved the beach, and we appreciated the single plane flight, especially during those early years when it felt as though we were hauling half the house around with us. Car seats, a stroller, a diaper bag and all the other paraphernalia a baby and toddler require.

As the kids got older and needed less entertaining on flights and much less stuff, we occasionally ventured farther afield, taking them to New Zealand to visit our fifth family member, Howard and his family and to Alaska for a week-long trip through the Inland Passage. Molly and Jimmy got along well together, most of the time, and were usually up for anything, as long as they had input on the choice of where we ate.

We had planned a trip to Italy in the spring of 2008 during Jimmy’s freshman year in high school, but the unexpected and devastating recurrence of his brain cancer forced us to cancel. A turning point and a wake-up call that had us realize we needed to step up our travel game. Even though we were still hopeful that Jimmy would survive, we had to face the reality that nothing was guaranteed, and we might have far less time with him than we’d thought.

Once Jimmy finished a brutal year of intense chemotherapy treatments and a three-month quarantine at the hospital and at home, we asked him where he wanted to go first. A big fan of The Amazing Race, he chose Iceland, one of the stops in the 2004 season. Jimmy was captivated by the city of Reykjavic, the Seljalandsfoss waterfall, the Vatnajökull glacier and the milky turquoise blue water at the iconic Blue Lagoon. In the years that followed, we explored France, Italy, Puerto Rico; returned to Mexico and spent countless weeks each summer on the Tour de Molly, watching her play softball.

Jimmy’s final trip was to Portland to see his favorite uncle Chris, Dr. Nicholson and several of his closest friends and watch his beloved Blazers play one last time. 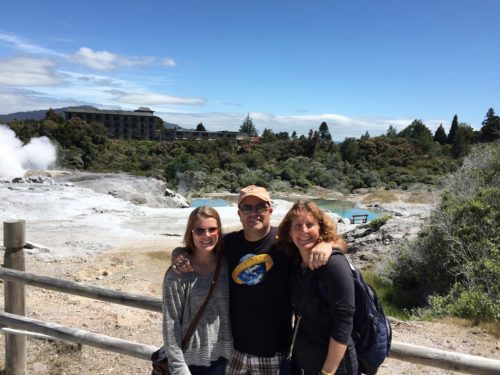 In the months and years following Jimmy’s death, as we ventured back out into the wider world, we carried him with us, sprinkling his ashes to New Zealand when we went to see Howard, in the harbor in Sorrento, on a plain in the Serengeti, a scene right out of Jimmy’s favorite childhood movie, The Lion King.

I felt closest to Jimmy away from home in those early years, whether I was walking on the horse trails near our house or exploring foreign lands. No matter where we went as a foursome, Molly and Dan would speed off, leaving Jimmy and me to trail behind at our slower, companionable pace. Even after Jimmy died, his presence was still so strong that wherever I was, I felt as though I could reach out and touch his arm as I strolled behind Molly and Dan.

It is a gift to carry Jimmy with us as we travel, knowing how much he would have loved the places we go and the experiences we have. To keep journeying out is to honor him and his too-short life. Visiting the places he ran out of time to see. Eating the foods he loved and the ones he would have wanted to try. He’d been so clear about how badly he wanted to survive and so insistent that we go on living after he was gone. Leaving small pieces of him in other places has helped me feel at home in the world, knowing that wherever I go, we go together. Even now.