You Have Made This Life For Me

Today for some reason, I see how short our lives actually are and how often I forget to look in your eyes and stop time entirely and say, You have made this life for me. Brian Andreas, StoryPeople

Twenty-nine years ago, I married the boy I met the first day of freshman year in college. Not right away, of course. We both had some growing up to do first. I’d had a crush on him on and off for years before we started dating. I knew he was “the one” the day I agreed to play (and I use that term loosely ..) as a sub on his co-ed softball team, nine months after we started dating. One of Dan’s teammates had brought his kids to the game — a little boy about six and a little girl around four. They’d both brought their mitts, but no one was paying any attention to them. Within a few minutes, they were both in the outfield, one on either side of Dan, and he was teaching them both how to field ground balls. 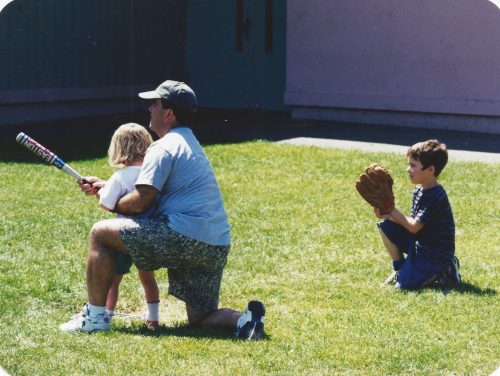 We got married at my cousins’ house in the country. We wrote our own vows. The minister, who we found at a local church with a huge “NUCLEAR FREE ZONE” sign over the entrance, loved being part of the celebration so much that he stayed for the entire afternoon.

For richer, for poorer …

I often tease Dan that I married him because he had a Cuisinart, a VCR and a cordless phone. Outside of our clothes and wedding presents, we didn’t have much else when we moved in together, first into an apartment, then into a house in Sacramento.

In sickness and in health …

Eighteen years into our marriage, Jimmy was diagnosed with brain cancer. And that smart, talented, loving man, who has been the kind of person you call at 2:00 am when the shit hits the fan since he was seventeen years old, became my rock in a way he’d never had to be before.

For better, for worse …

In those long dark days after Jimmy died, when Molly was in school all day and then at softball practice, it was Dan who kept me upright, dragging me out for walks with the dog when all I wanted to do was curl up in a ball on the bed and stay there. He convinced me it was time to set a date for and plan Jimmy’s celebration of life. He gave me the courage to leave the house and go to Molly’s first high school softball game of that season, suggesting we bring the dog so that we could sit beyond the outfield fence, not talk to anyone and pretend we were doing it for Buster’s sake.

This weekend we celebrated our 29th wedding anniversary, three and a half years after Jimmy died. Despite the massive hole he left in our lives, we are both committed to living the life he didn’t get to have. Still moving forward. Holding each other close. Making a life together.